Buying an old house is no joke – thankfully Esther O’Moore Donohue has a serious sense of humour about her tumble-down pile. Welcome to her renovation diary

Owning my own home was a dream I didn’t think would ever come true, but in summer 2017 I started to say it out loud to whoever was passing. I threw it out there in the same way you might announce, “I think I’d like to jump to earth from a helium balloon hovering in the stratosphere à la Felix Baumgartner.”

I didn’t really expect it to happen. So how did I, Esther Two Names, get it together and buy my first house? Let me entertain you.

When I first rang a bank to see what I could potentially borrow, a very nice man told me, based on the figures I gave him and Mercury coming out of retrograde, about €32.50. My inner David McWilliams (he is inside all of us) told me that I needed to pop out my calculator and go through my finances in greater detail.

A wonderful friend supported my daydream and gave me the number for her mortgage broker. It was one of the best things I did. Cutting a long story short, a small miracle happened and in January last year I went sale agreed on an old house in Dublin 8.

But plot twist... I didn’t buy it! My surveyor told me, in highly technical terms, that the house was, “in bits.” “B-b-but I love it,” I said. “Yes Esther, but see the way the floors are coming away from the walls,” he said. “Mmm-hmm,” I replied. “See the way you can sit on the loo and touch the cooker at the same time,” he pointed out. “Mmm-hmm.” “Do. Not. Buy. This. House.”

Very reluctantly, I pulled out of the sale. I couldn’t believe I’d managed to get anywhere within my budget in the first place. What was I supposed to do now? And then the unexpected happened. THE HOUSE NEXT DOOR CAME ON THE MARKET.

The bidding process was tough and went on for about six weeks. My budget was stretched to its absolute limit. However, on the night before the bad snow hit in 2018 (nice and dramatic) I got an email telling me the house was mine, by €1,000! Lightning had somehow managed to strike twice and eight long months later, I collected my keys.

I moved in straight away, armed only with a mattress, a kettle and a supply of Koka noodles. The house had lots of issues but overall, was liveable. I could have just made do, but there was damp that needed to be dealt with sooner or later – so I chose sooner. 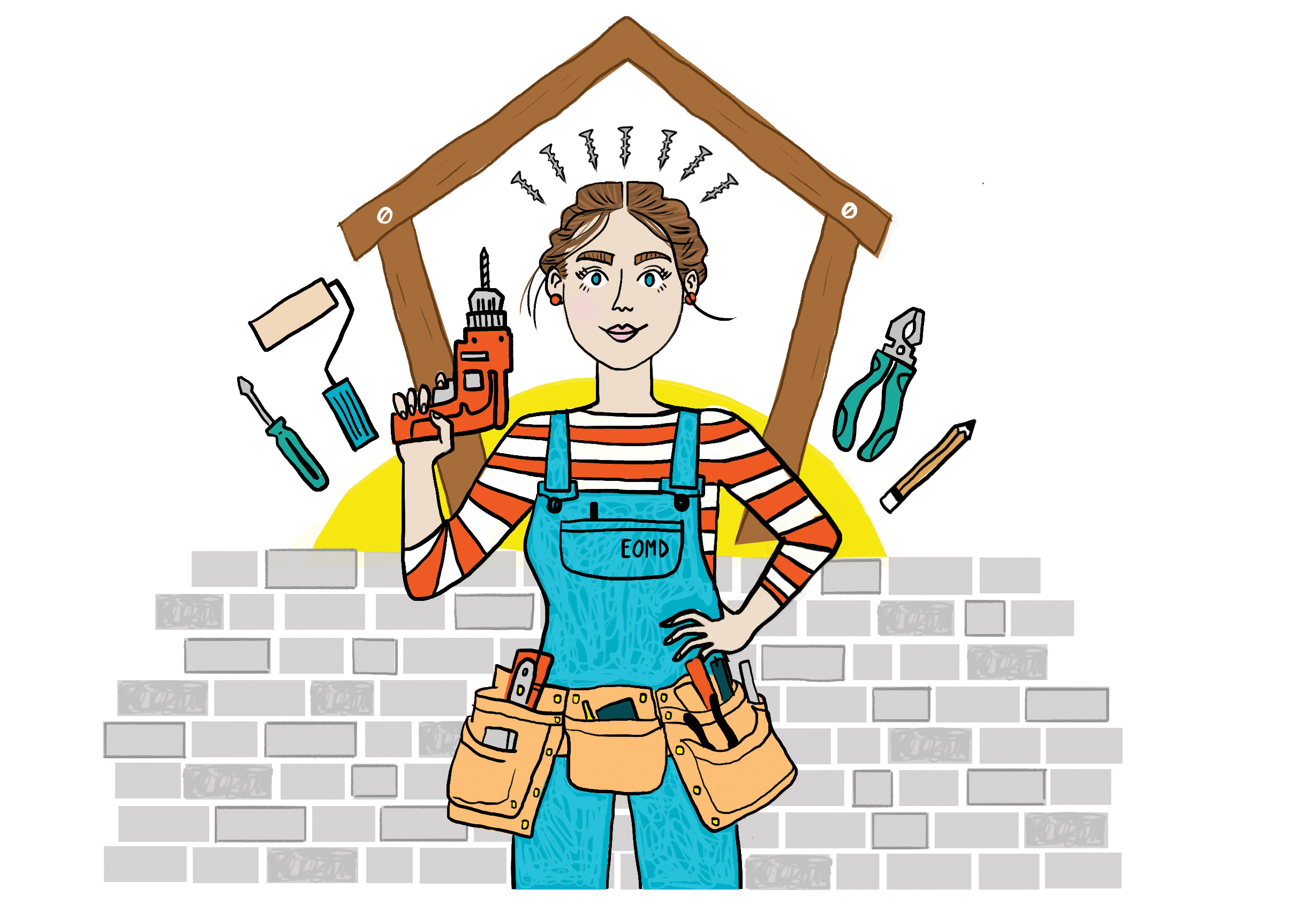 One Tuesday morning I headed off for work leaving a normal looking house behind and returned to a tonne of rubble in the front room. All the radiators had also been taken down, meaning I had no heat. I was assured it would all be done and dusted by the end of the month and I’d roasting my tush by the fire in no time. Famous last words.

‘Damp Man’ discovered that the house was riddled with lil’ cuties called wood boring parasites, and all the window lintels were rotten and needed to be replaced immediately. I was thrilled.

The show had to go on. Once the damp had been treated and parasites assassinated, the plasterer could step in and work his magic. Unfortunately, owing to some communication issues, I decided it was best for me and ‘Plasterer Number One’ to consciously uncouple.

This meant I was trotting towards a cold November and the house still looked like somewhere Tiny Tim lived.

My hunt for a handyman and ‘Plasterer Numero Two’ was not easy. I put requests out on Facebook, Twitter, Nationwide, but to no avail. I had picked the worst time of year to start work as Christmas was fast approaching. At the same time, I was chasing my plumber who kept cancelling on me.

I needed to lock him down by Christmas week or I’d be rolling Baltic into 2019. In the nick of time, Derek the Wonder Plasterer appeared like a white van driving knight to save the day. ‘Lintel Man’ soon followed. God bless us, everyone.

December was ‘brisk’ to say the least. I slept three blankets deep wearing a beanie. Thankfully, by the second week of January, my plumber came through, hung my radiators and got the shower working. After months of cold, walking through the front door into warmth felt like total luxury. I was giddy with joy, going from room to room listening to the radiators fill up. Sad but true.

So, what’s next? I hear you not say. The next big projects will be redoing the downstairs loo and kitchen, so I’m back in saving mode. In the meantime, I’m tackling my bedroom, transforming it from the dumping ground it has become, to a place of calm, serenity and Real Housewives of New York-watching. My Double Barrelled Renovation continues.

The 80% with Esther O’Moore Donohoe is a podcast where Esther is 80% happy for the success of her guests. Subscribe to her podcast and sign up for her newsletter at Estheromd.com.