Last week on Room to Improve, Dermot's Home, we saw the start of Dermot Bannon's forever house build. Lots of things happened: like the build going wildly over budget, not to mention 16 weeks over schedule. We enjoyed it massively, and of course, set a reminder to watch last night's episode to see if it'd all come good in the end. Spoiler: it did.

This week we wondered if it was less about Dermot’s house and well, more about Dermot’s garden – the bulk of the show was taken up with Dermot/Diarmuid’s dilemmas over ‘wavy tin’, the infernal wall and steps and, of course, massively spiralling budgets. A special award to the eye-rolling skills of the joiner who was not here for the telly-slash stove plans.

Here are the rest of our highlights from last night's show:

One Dermot wasn’t enough for us, so they got in another in the form of celebrity plant-fancier Diarmuid Gavin, who stole our Dermot for an afternoon to check out his own garden which, in a kind of cognitive dissonance, appears to be a farm in Africa, but is in actuality a plot in Co Wicklow. Well, he did win gold at Chelsea, we guess, so he's good at this stuff. It is bloody nice and Dermot seemed to think so too, raving about the plans Diarmuid created for his Drumcondra garden following the visit.

A goddess among women and quantity surveyors, Patricia has the laser-focused ability to sear through Dermot’s notions with a really rather on point cost estimate. 30k was his idea of how much his super enormous massive gardens – front and back – involving outback-style tin sheds, plumbed in baths, excavations, building, planting, driveways, would cost... sorry, we’re exhausted. It didn’t come as any surprise to anyone watching the show that the garden estimate was approximately three times that. Which brings us to…

Leave it to a family member to reveal all your embarrassing secrets. In total fairness to Dermot, he didn’t hold back any potential mortifying moments from the nation either, from complete indecisiveness over the terrazzo choice to the shenanigans over the stove flue. We particularly enjoyed the relish his brother displayed as he revealed Dermot-as-a-child’s love of Bucks Fizz and spying on the neighbours. He’d been saving that up, clearly.

As he drove down the road to – well we don’t know where exactly, but we’re guessing it was despair – Dermot called up Patricia who didn’t sugarcoat the sitch for him. “It’s my fault, isn’t it,” he wailed about all the things he’d let slip and then go hideously over budget. “It is, yeah,” she said, in matter of fact tones. Lol!

If we’d one criticism of this week’s show it would be that there was way too much garden and far too little kitchen. One of the things we love the most about RTI is seeing the house come back together, and we missed out on that this time.

The breadcrumbs dropped last week about re-using the period doors and fireplaces weren’t picked back up. Nor was his idea for a pattern for the large picture window – in the end, it was simply frosted and not mentioned again. We didn’t really see much about picking the fittings: we did notice he went for Miele appliances (a man after our own hearts) and a lot of the lighting came from Hicken Lighting, but this is a part of the process we think we’d all have loved to have seen more of.

That said, the finished house made up for this – almost epic in scale with those essential architect-style clean lines and precise finishes, it’s a marriage of sleek stone, wood and glass with a spacious feel that belies its location on a suburban road in Dublin 9.

In the end, Dermot has proof of concept and he was right about the house he bought. A shell it might have been, but the potential in the existing house and the seclusion of the lot it sits on means that his year-long build to bring his grand design to fruition has delivered a fabulous family home he will enjoy for years into the future. 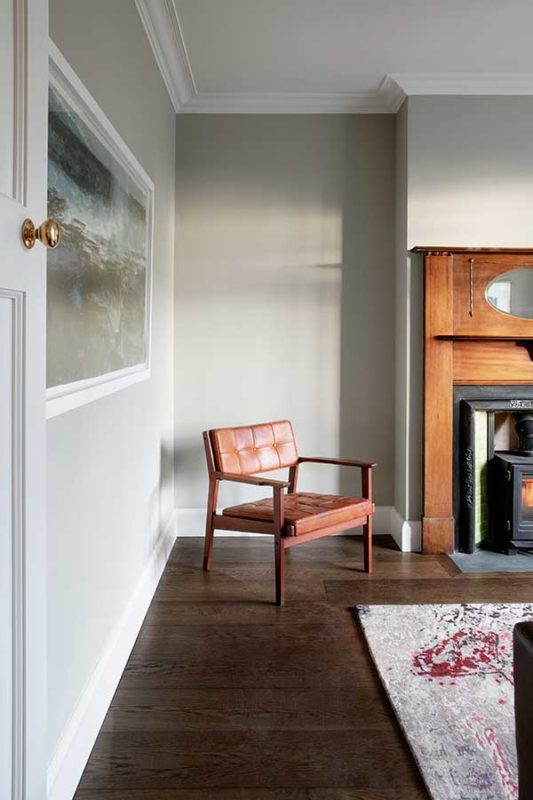 The original living room of the house, with restored period fireplace 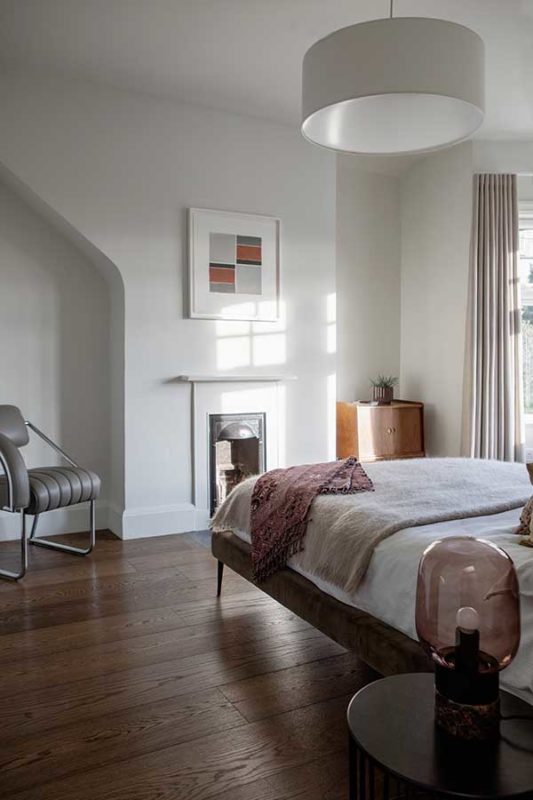 A bedroom, with contemporary and period finishes 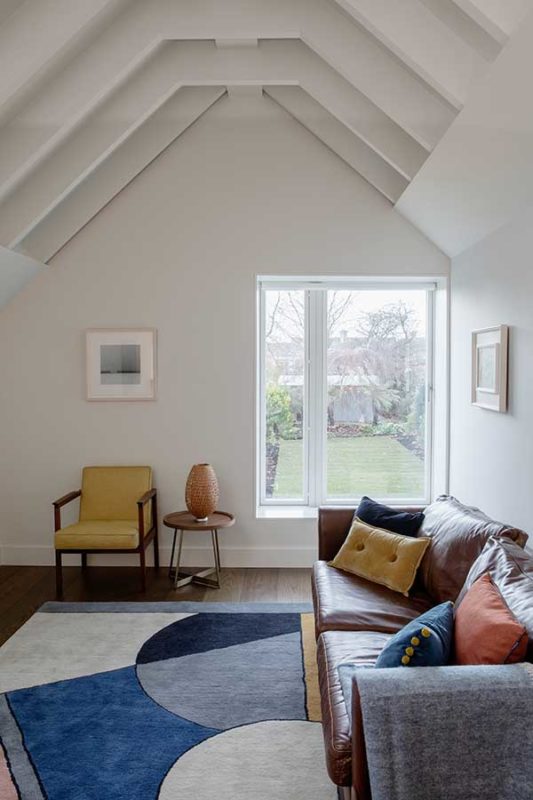 In the upstairs vaulted space, the rug is from Rugart 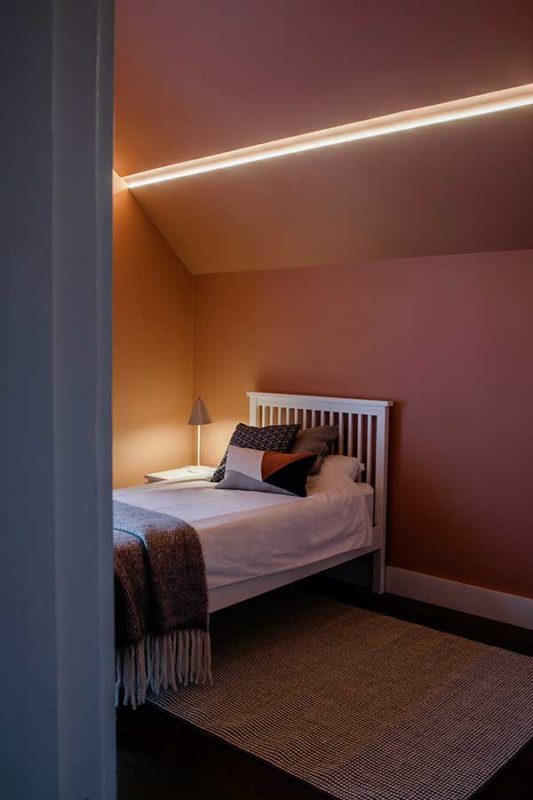 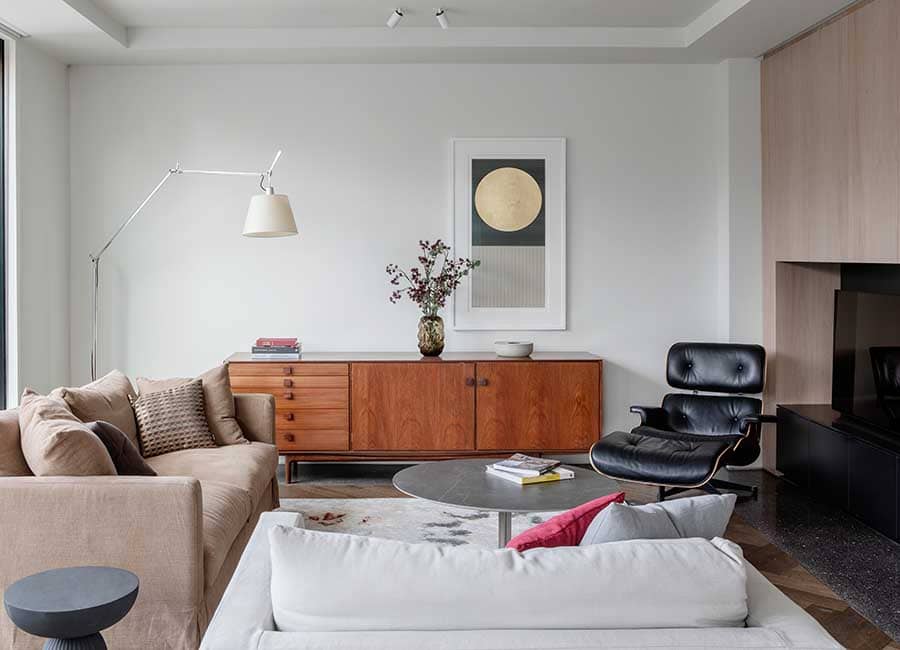 The main open-plan area is spacious and comfortable, featuring vintage and contemporary pieces 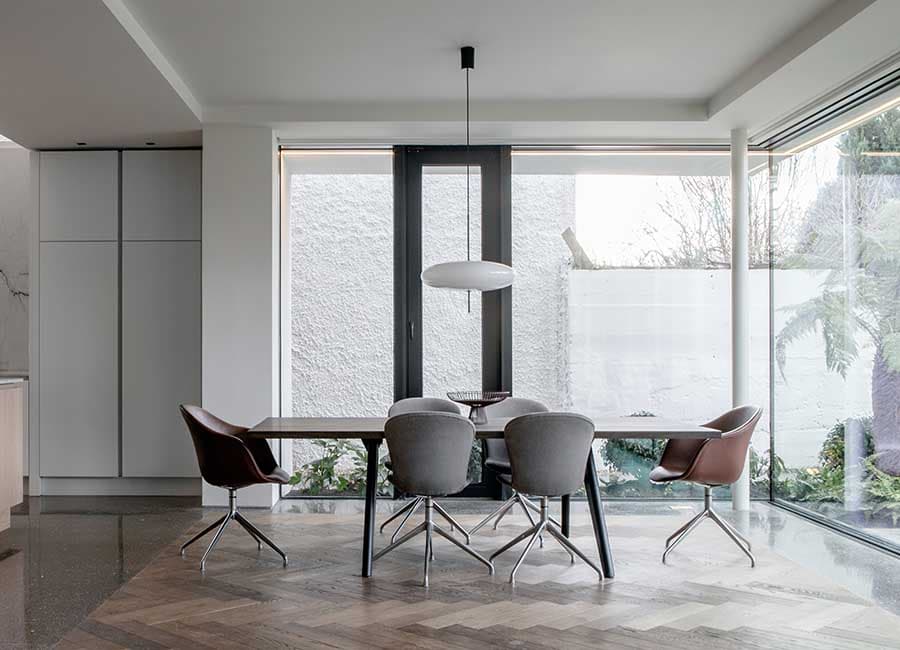 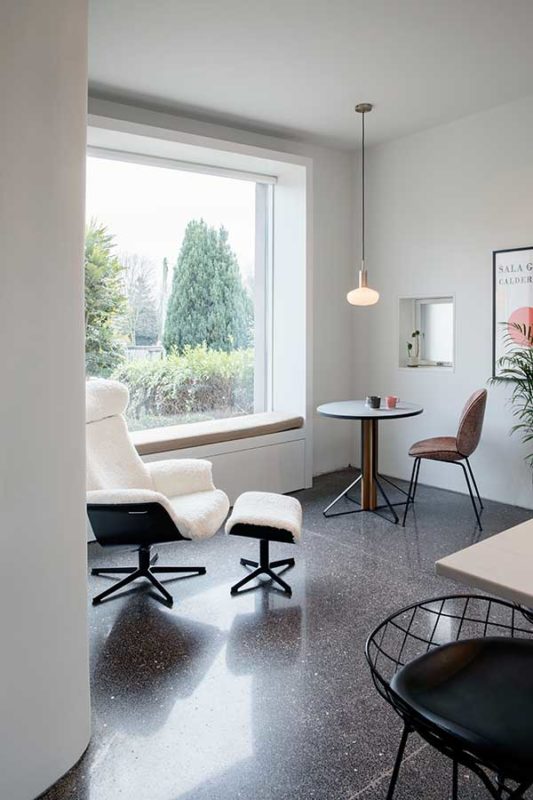 The snug area with its view to outside is a calm, functional space 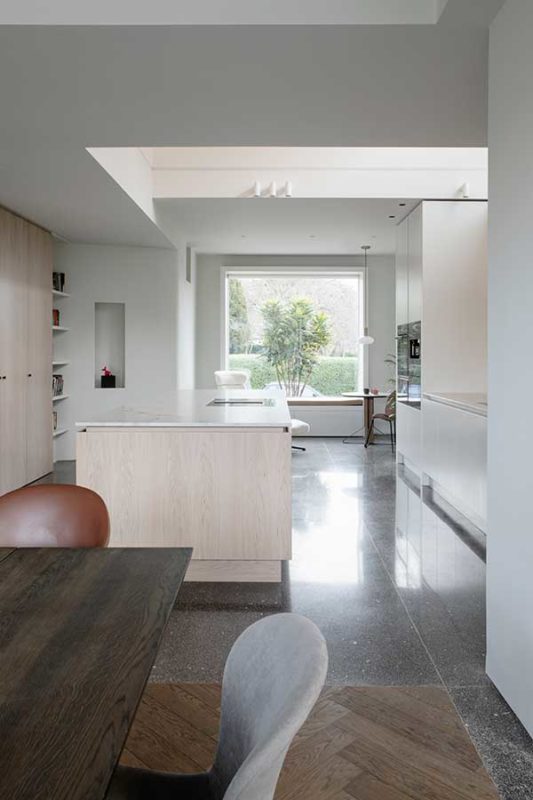 The sleek kitchen was created by Healy Mangan, with worktops from Miller Brothers