Often cluttered and poorly laid out, Emily’s classic Dublin terraced home is a study in how to use space superbly 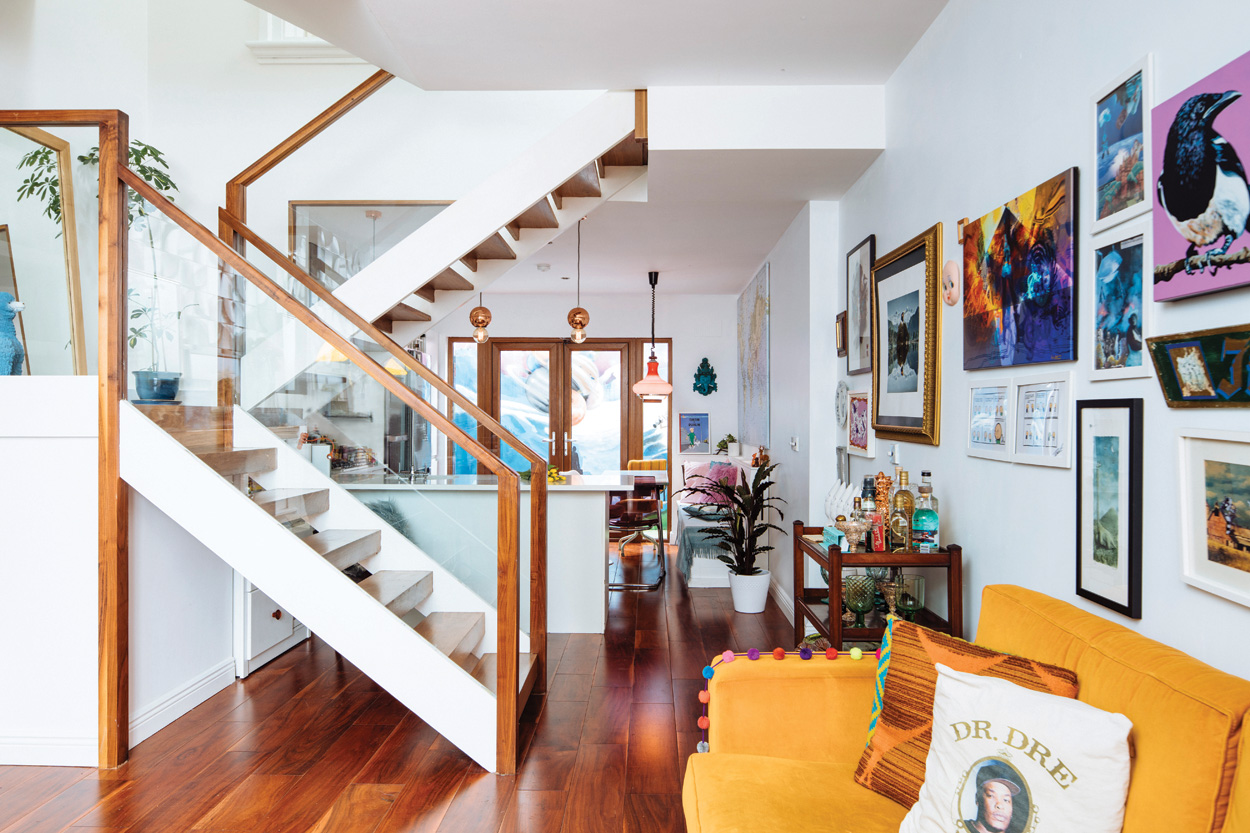 Boarded up and abandoned, but the place just had something about it. That was 2014, and Emily Cunnane, an interior designer and owner of InSpace Design wasn’t even in the market for a property. “I was nearing the end of my lease just around the corner and was having problems finding a new rental place. I just happened to be walking down the street and happened upon the house. I’d no idea if I’d be able to get a mortgage or how much it would go for ­– and I hadn’t looked at a single other house, but this one had something about it,” she recalls.

A real ‘listen to your gut’ experience, Emily jumped into her Dublin terraced home feet-first. “I made the ultimate spur of the moment decision in buying it, and it’s paid off,” she says. The house had been owned by a local builder who’d been using it as a store for years; it was in bad shape and there was a half-finished extension out the back. Despite all that, “I loved everything about it,” Emily enthuses. “The history of the building, the quirky little details like the boot scraper at the door, and the location.” 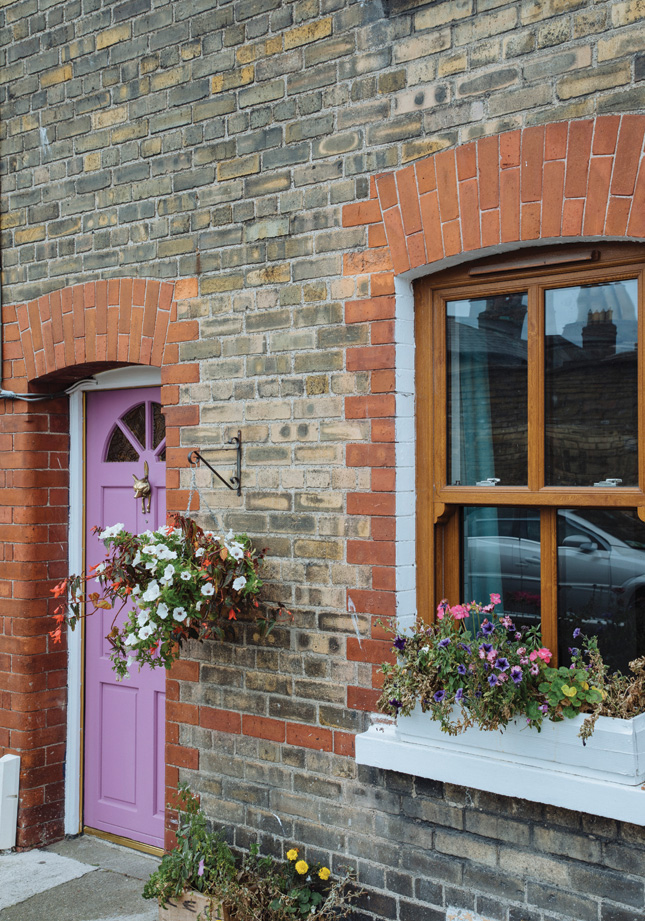 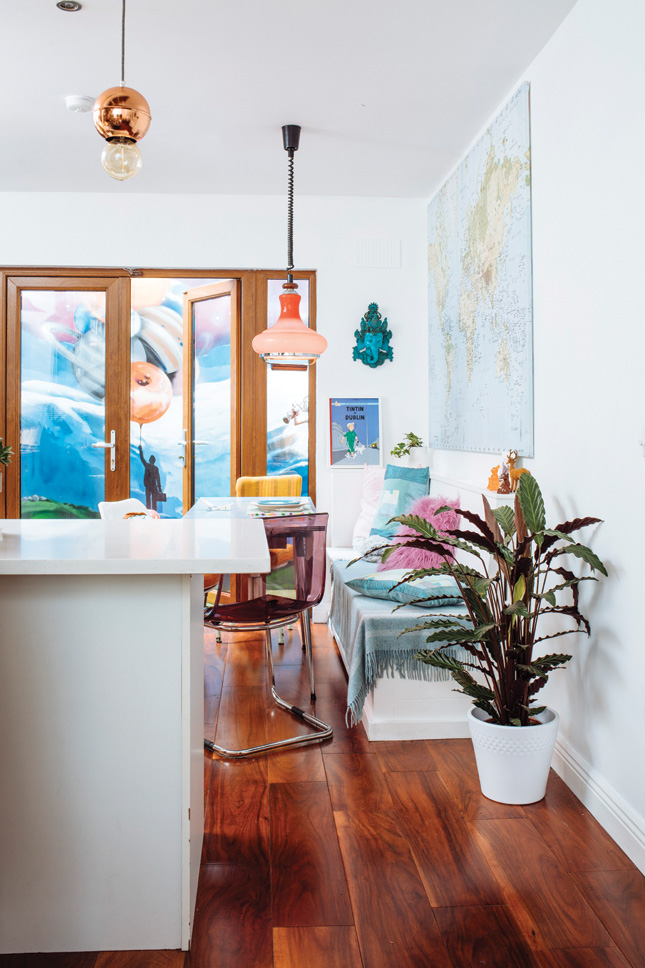 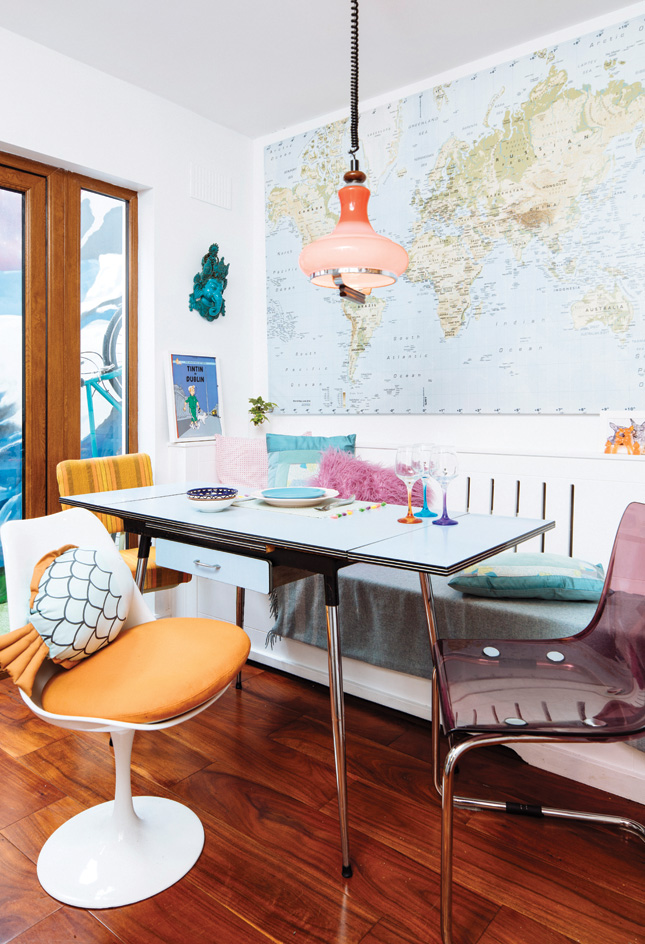 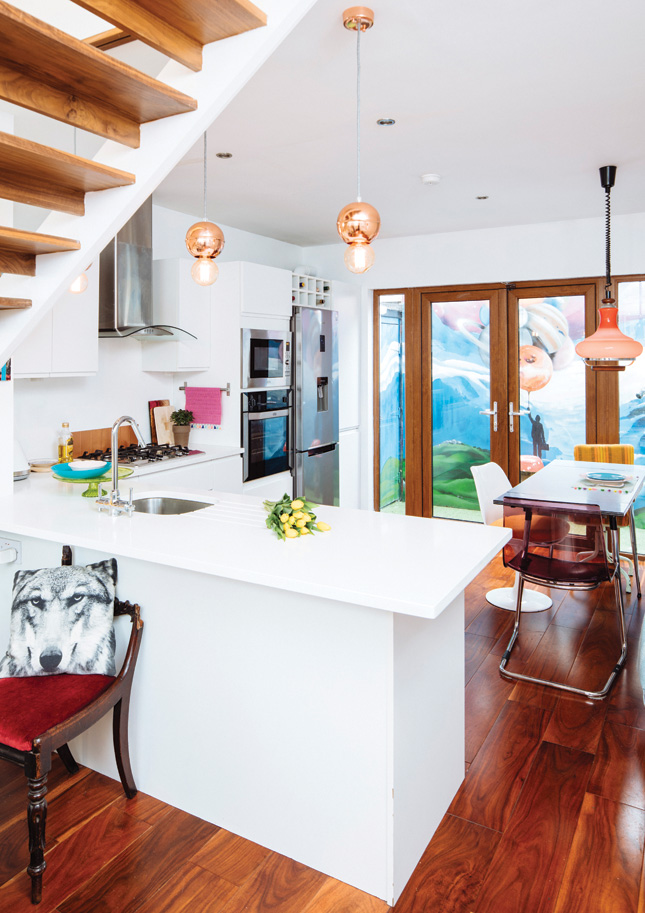 KITCHEN/DINING: In the dining area, a reduced-sized Formica-topped table is a perfect size for this space. At it are placed a selection of vintage chairs, including an Eero Saarinen Tulip chair, on which sits a cushion from Mira Mira. For similar, try Kirk Modern. Everything is neatly tucked against built-in seating which also acts as extra storage. 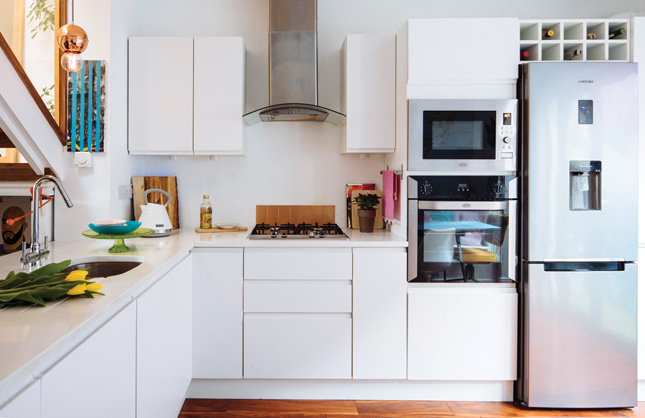 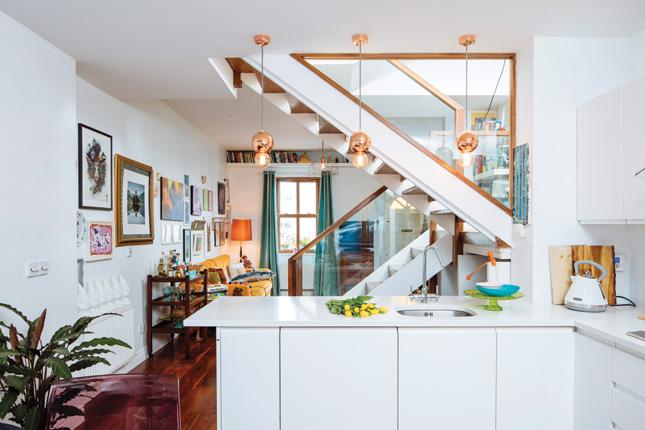 But there was significant work to be done to bring the Dublin terraced home up to a liveable standard. Most of its original features were gone and the house was half-gutted, so there was a lot to remedy. “Nearly everything had to be stripped back and put back in,” Emily says. “New plumbing, electrics, roofing, insulation, stairway, walls and flooring. We re-used everything we could; as many of the old roof tiles as possible, original floor boards, we even kept a window frame from the original house and use it now as a picture frame.”

What was a mammoth task at the time provided a fantastic opportunity to reconfigure this Dublin terraced home to make it work for modern living. And she did it all herself with the help of a structural engineer – another feat. “It was quite a dark house, so I had a specific idea in my mind of opening it all up and making it into a light-filled contemporary space that would surprise people when they came in from the traditional exterior,” Emily says. “I really wanted to put a bathroom upstairs, which doesn’t happen in these houses – it’s usually downstairs; a hangover from the old outhouses that used to be out the back.” 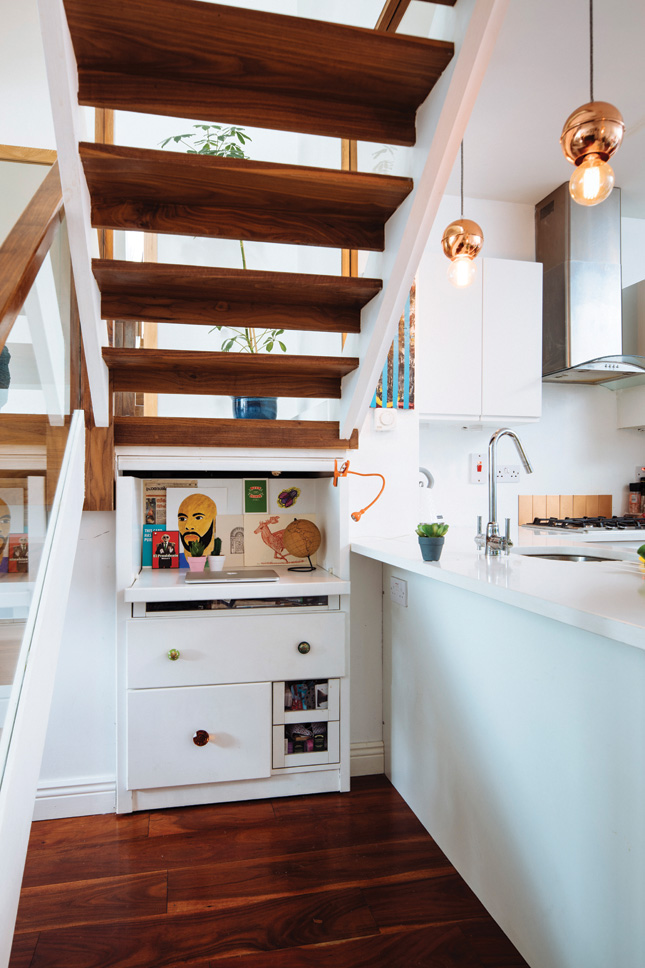 ADDED BONUS: “The stairway also ended up creating another tiny room underneath it – my office,” she reveals. In here, there’s a super-clever pull-out desk – designed by Emily and built by her carpenter uncle – which has shelving hidden on its back. He also built her kitchen and the shelving by the fireplace. 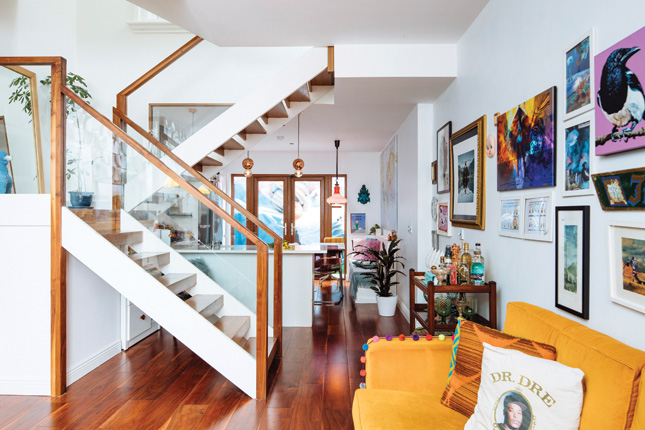 LIVING AREA: Emily’s repositioning of the glazed stairs into the centre of the room gives this large space flow and makes it feel spacious, as does the unifying acacia flooring, which runs throughout the ground floor. Other clever tricks include using vertical height and building in as much furniture as she could. 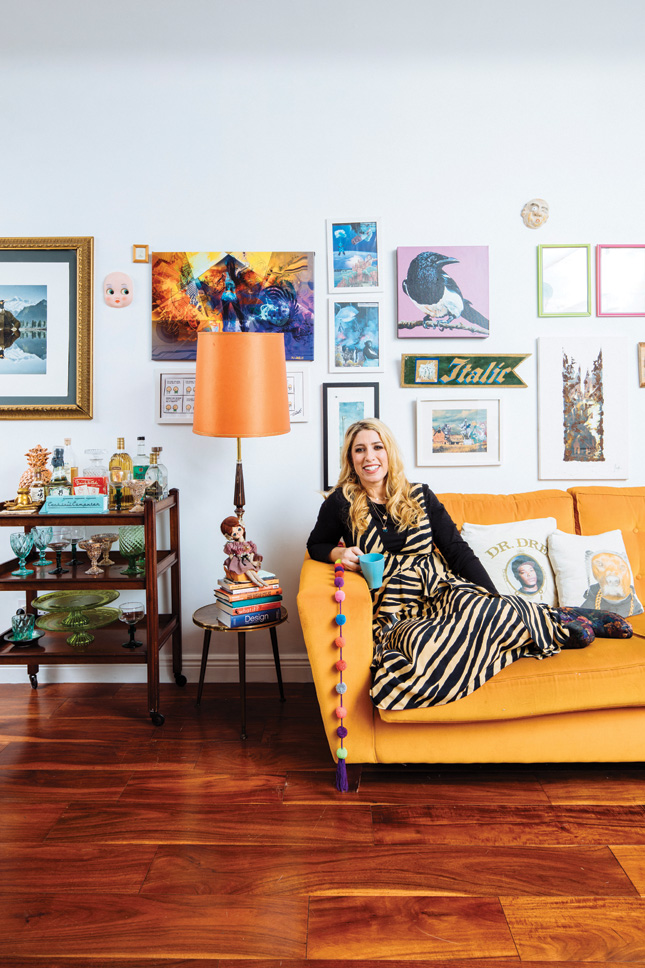 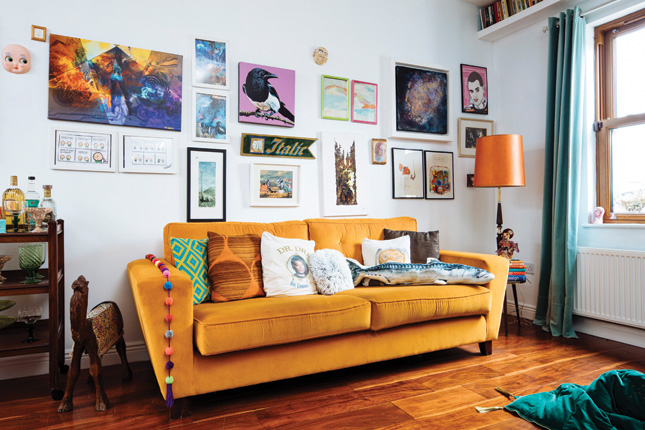 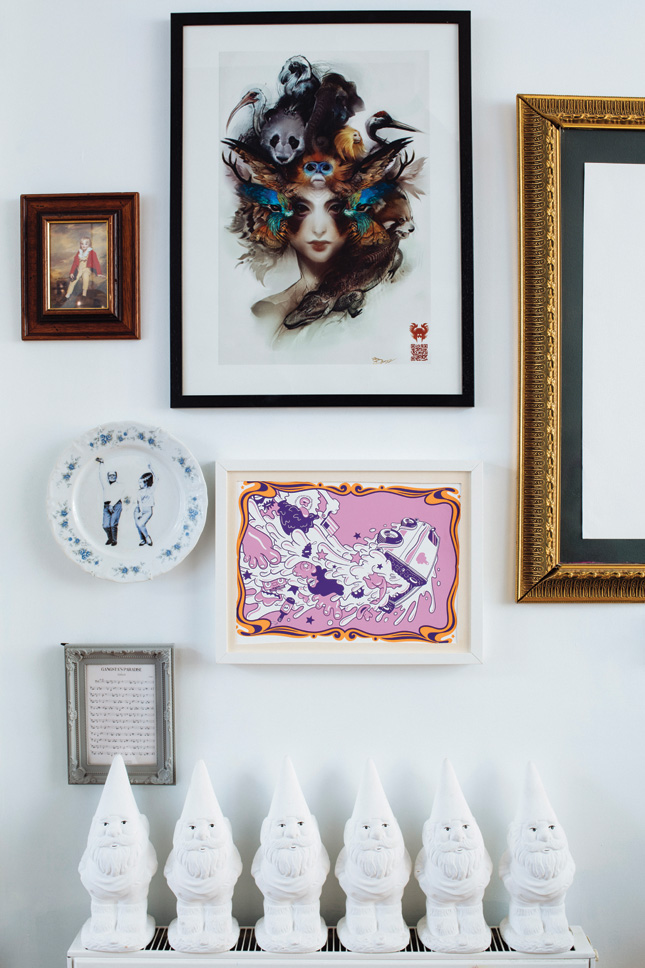 Her solutions included adding a double extension, moving the stairs into the centre of the house and adding skylights upstairs to draw light downwards. “I did have to sacrifice yard space out the back,” she points out, “but I left a little space and added glass double doors, a mural and artificial grass to give an illusion that there’s more out there, which I think has worked.”

One of the most impressive things about Emily’s home is how she’s maximised every inch of her available space. “I’m not naturally a small space kind of person,” she confesses. “When I was designing, we had to really think in detail about how to squash everything in. To maximise room in the kitchen, we built a small housing just outside the back door for the washer/dryer. I built a corner banquette for comfy seating in the kitchen, which lifts up for storage,” she says. Shelving is built in right to the ceiling so art can better be displayed and the hot tank was placed under the stairs. “I designed every bit of furniture individually and gave drawings to my carpenter who built it all,” she says. 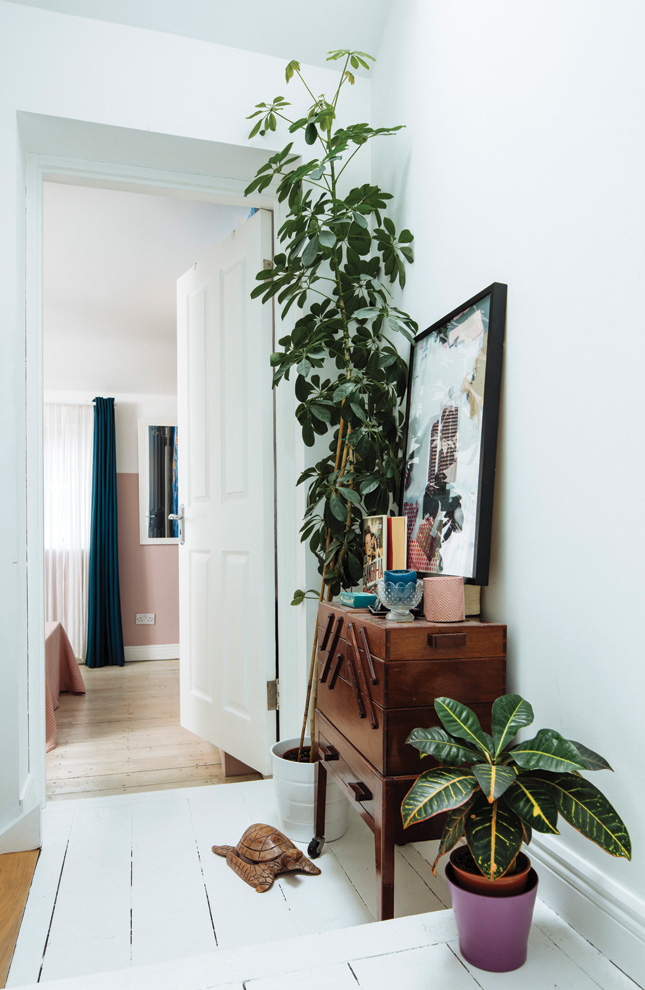 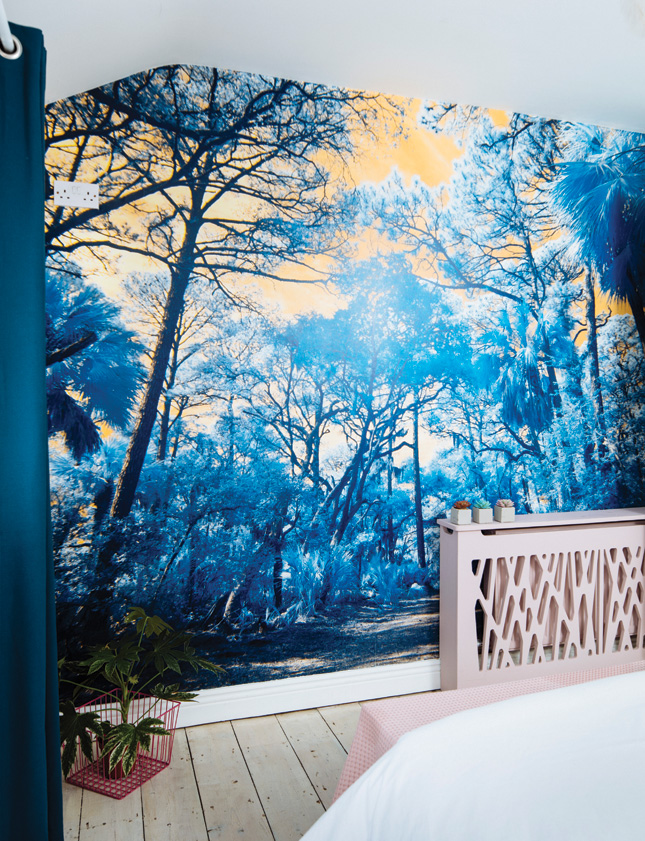 MAIN BEDROOM: Emily’s initial plan for this room was “dreamy, tranquil and calm,” but that didn’t last long. “It turns out that you can’t hide your inner peacock and eventually colour started creeping in,” she laughs. There’s a wallpapered forest scene on the wall facing the bed and she added the mural herself. 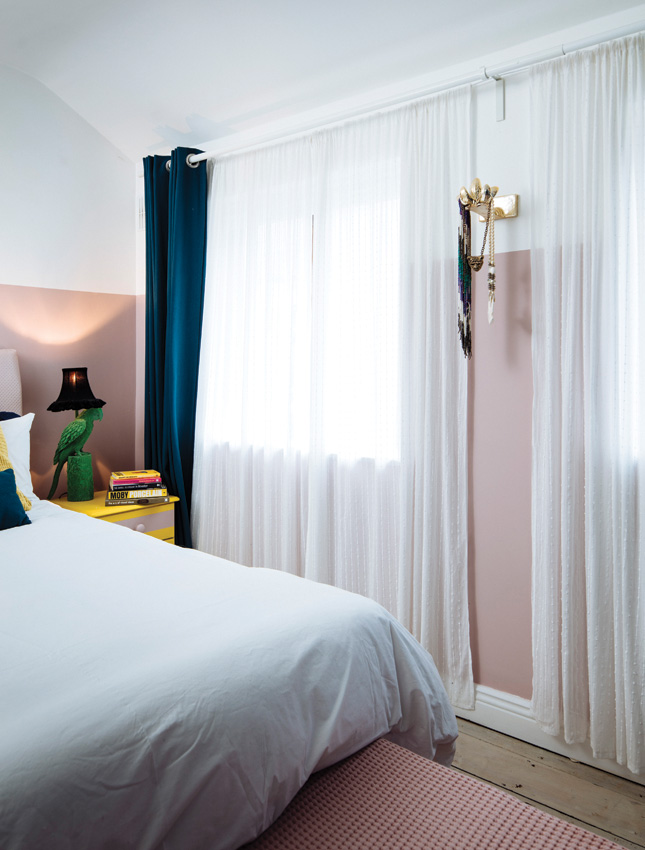 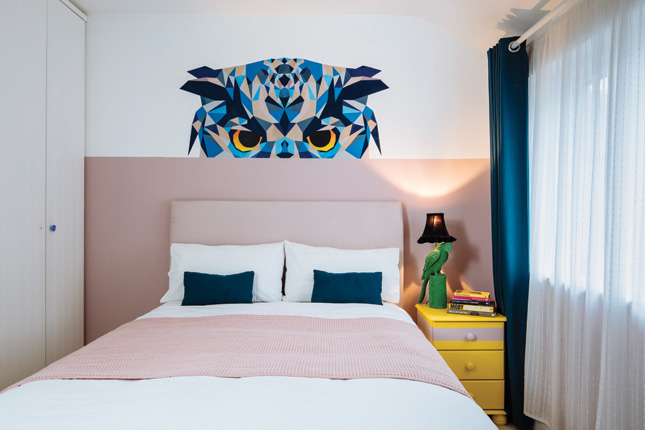 The proof that a small space doesn’t have to be bland is in the pudding. Emily’s colour and collectible-filled home showcases her love of ‘stuff’ and her clever design tricks ensure that the rooms in her Dublin terraced home never feel overwhelmed. “I like to fill my house with items that mean something to me,” she says – the ethos of making a house a home. “Pretty much everything has a story and will have been picked up anywhere from Colombia to Borneo, Burning Man or Tokyo.” 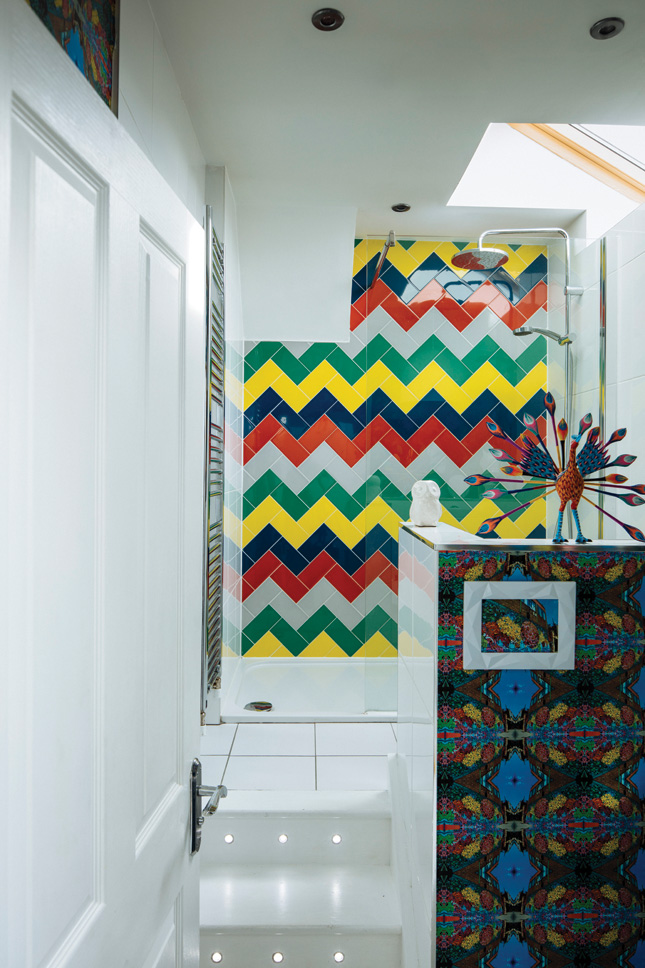 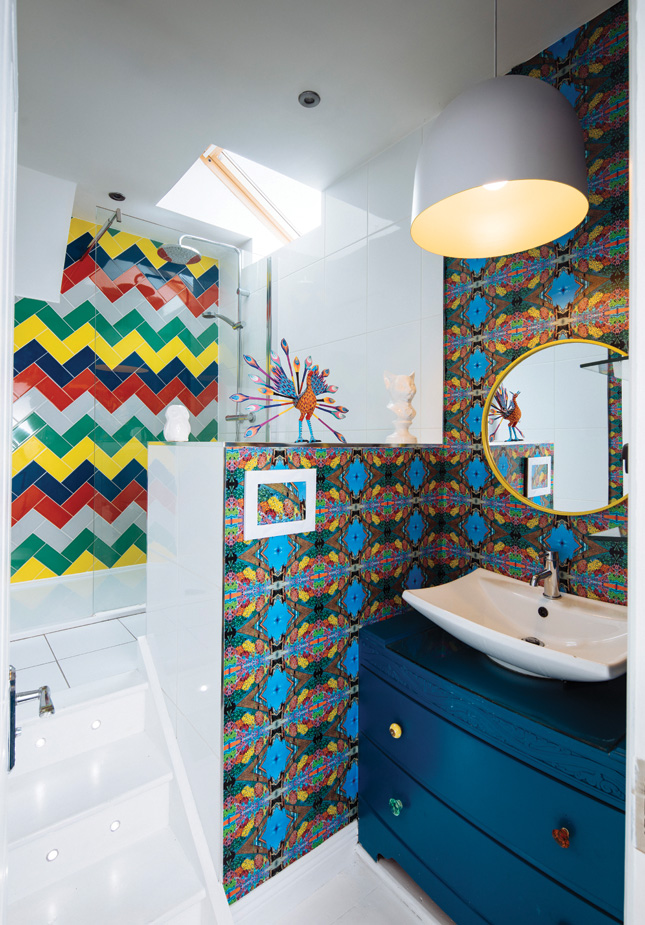 BATHROOM: Emily claimed back space for this room thanks to the positioning of the stairs. Clever design has created defined zones within the space too.

Emily’s small space tips, based on her Dublin terraced home