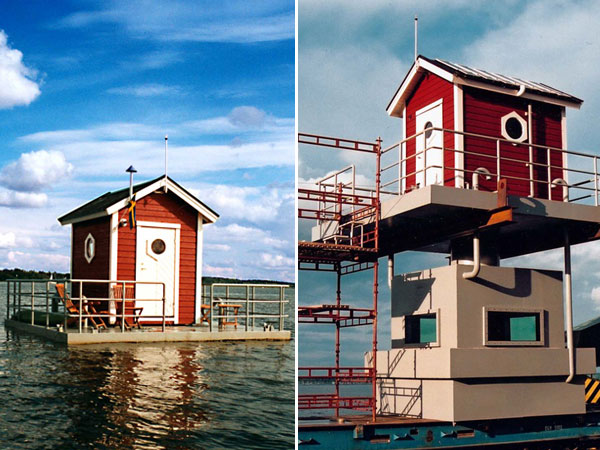 What is it:
Utter Inn, Sweden; The bright red, two-story floating Swedish cottage (whose second story just happens to be underwater) bobs in the middle of Lake Mälaren, just west of Stockholm.

What’s so special:
The Utter Inn is the brainchild of Mikael Genberg, a local artist and sculptor who has chosen to focus on "making art for the public". Open since June 2000, the single room of the hotel is submerged three metres below the surface of Lake Mälaren and contains only twin beds and a table. Upon arrival at the Utter Inn and after receiving all the instructions guests need, they are then left alone. Those who have selected the deluxe version have a visit later with their supper.

Guests can also swim, sunbathe or watch the fish (from both upstairs and downstairs) at the hotel. The room above the water’s surface is equipped with kitchen equipment, hotplate, dinner service, a ten litre can of fresh water and a cooler.

Far from ordinary, the Utter Inn is sure to be more of an aquatic adventure than a hotel stay.

Getting there:
Ryanair fly direct from London Stansted to Vasteras in Stockholm. Flights to London Stansted depart from Kerry, Cork, Knock and Dublin airports. Upon arrival at the port of Vasteras, guests are taken out one kilometre on Lake Mälaren in an inflatable boat.

Beautiful wall, floor and worktop surfaces for your home with Dekton Onirika

Which type of worktop is best? Your questions answered by Noyeks Newmans