Angus and Marie Sharpe have transformed a seventeenth-century farmhouse into a comfortable family home for the 21st century. Read the full feature with extra pictures and great ideas in the current issue of House and Home, in shops now! Words and Pictures: Barbara Egan/Reportage Styling: Penny Crawford Collins.

We designed the living room to be really comfortable and cosy, and quite old-fashioned except for the large-screen plasma TV, which Angus insisted on! says Marie.

The wall colour is ‘Timeless Beige’ from Fleetwood Paints and the fire breast shade is ‘Coffee’ also from Fleetwood, black and white cushions are from Dunnes Stores, the others Marie had made up. The ornate side table and the glass-fronted bookcase both came from the Ashford Antiques Centre in Ashford, Co Wicklow. 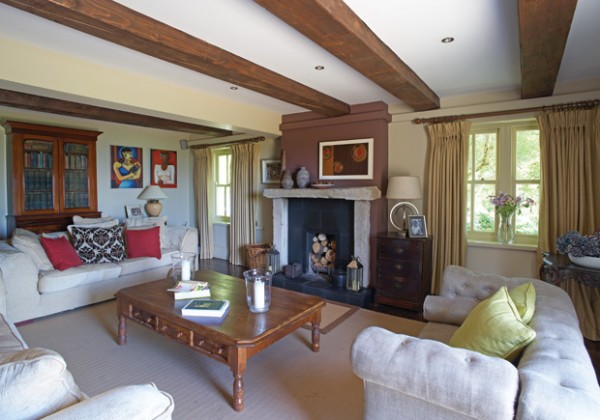 Marie chose the colours to be warm and inviting - the neutral palette of the room is accented with reds and browns. 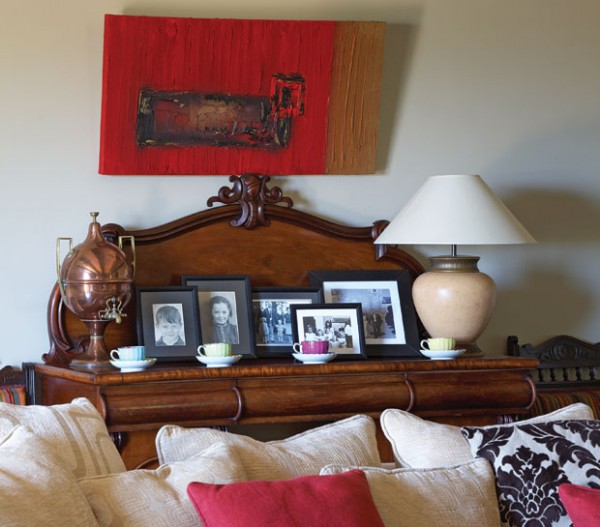 The dining room was quite dark, so the couple added the glazed double doors to the corridor, and put new windows in that outside wall. 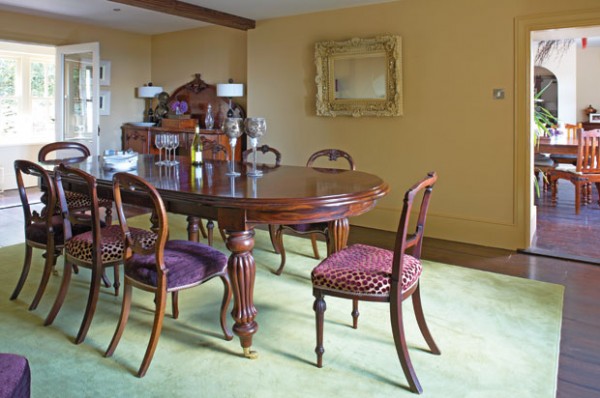 My brother and his wife painted the mural around it; they have a specialist paint effects business, and they created a subtle décor which really lifts the room, with touches of gold to catch the light. It’s a lot of fun and I love it - says Marie. 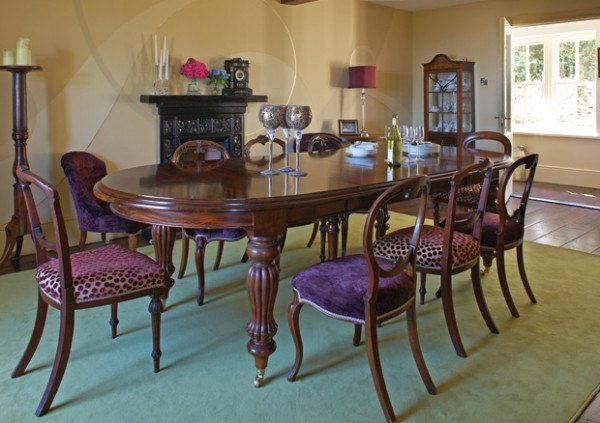 The dining room mural is by Haddington Paint Effects, Marie and Angus found the sideboard in Ashford Antique Centre and were delighted when it just fitted neatly in. The dining room table and six balloon back dining chairs came for an antique shop in Newark on Trent, the six Victorian mahogany chairs were a present from Angus’s mother, Frances and are covered in a GP&J Bakerspotted fabric.

The kitchen is a key room in most farmhouses, and the Sharpe’s is no exception, they broke into a second room to make a good-sized space, and added new windows to the west to brighten the area. An old- style stained timber floor was used, and keep the large area bright and warm, Marie used a cream colour on the walls, and a very simple off-white Shaker kitchen. 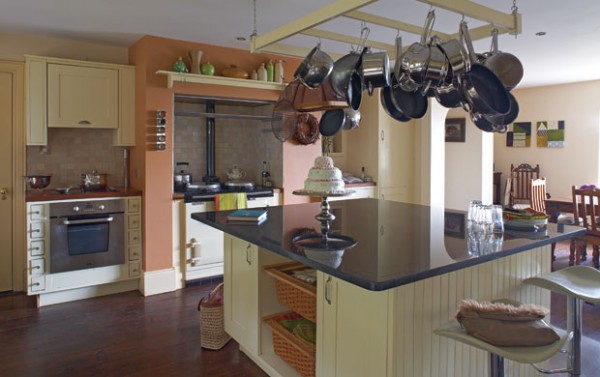 Marie designed the simple, clean-lined Shaker-style kitchen herself and had it made up by a local carpenter; the floors are pine boards stained with Colron woodstain and varnished. 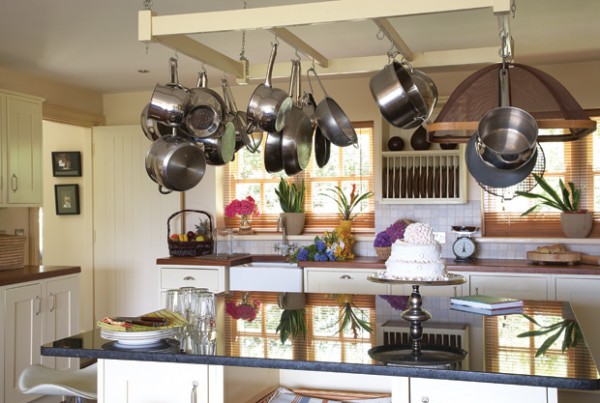 The wall colour is a simple cream, Marie used ‘Cinnamon’ from Fleetwood Paints for the Aga surround. Angus and Marie’s kitchen table and chairs came from Global Village; the copper kettles on the dresser were spotted in an antique shop in Sheffield.

Marie spotted these fabulous hand painted cupboards in Strawbridge Furniture in Ashford Co Wicklow, the wallpaper is Brian Yates, and Angus bought the salvaged radiators, which originally came from a wing of St James's Hospital in Dublin which was being demolished. 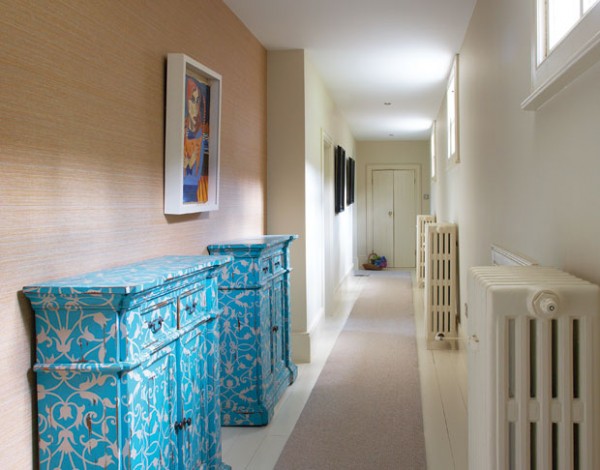 The walls in the master bedroom are ‘Timeless Beige’ from Fleetwood Paints, the feature wall is wallpapered in a Brian Yates print. The daybed was bought on eBay and recovered, the floor has also been finished in ‘Timeless Beige’, and the bed linen is from Top Drawer at Brown Thomas. 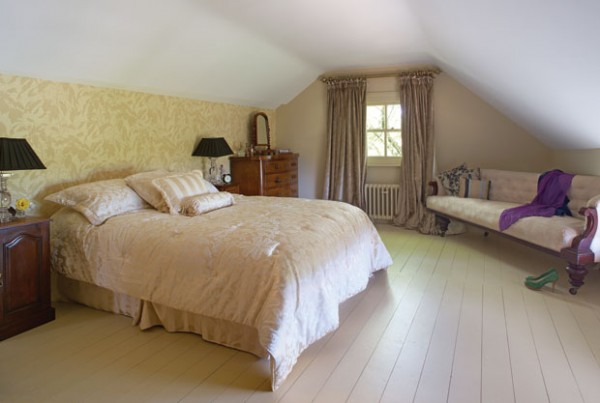 The inspiration for the guest bedroom was the beautiful Art Deco twin beds in an inlaid walnut finish, which were bought on eBay. The deco style chest of drawers is from Ashford Antique Centre; The pretty embroidered cushions and the ruched throws are both from IKEA, the bed linen is by Sherman Linen and was a wedding present. 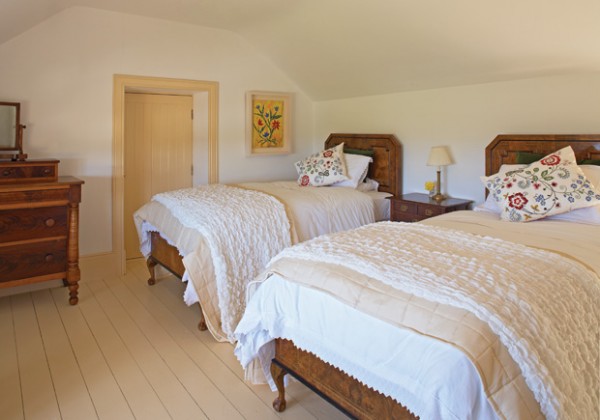 The bathroom suite is by Qualceram Shire. Angus bought the marble washstand online at eBay; and the radiator is a salvage find. 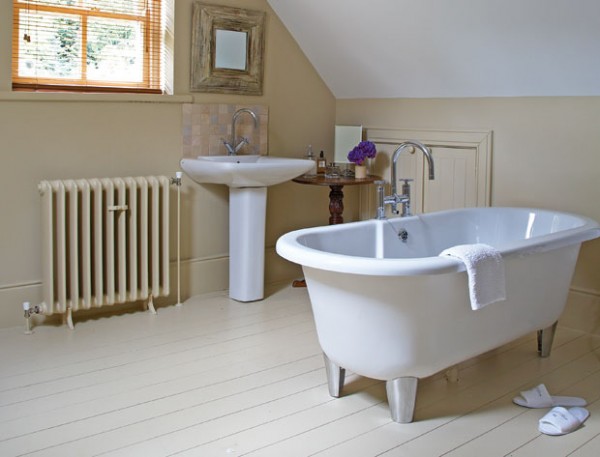 Tell us what you think:

Which room in Marie and Angus Sharpe's renovated farmhouse is your favourite? Tell us in a comment!