A budget bathroom makeover was on the cards for Darran's sister's house, and he offered to DIY the project for her

We've had a nose around Darran's (who is @oldvictoriannew on Instagram, don'tcha know!) house in our real home tour of his Dublin 7 home, but this budget bathroom makeover was a project he took on in his sister's house to help her and her partner out. And on a budget too - how sound! 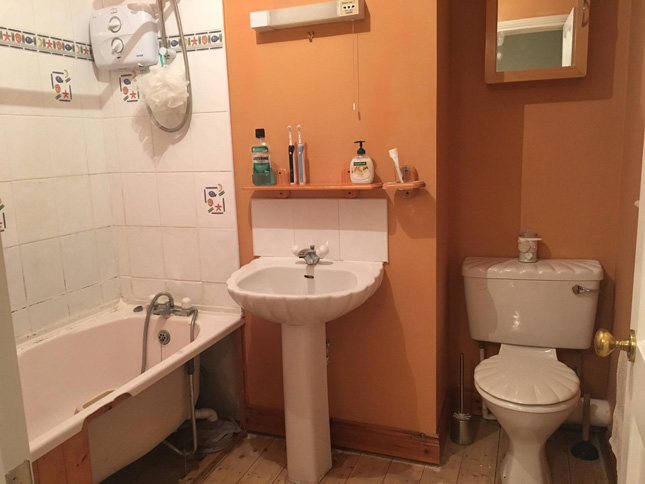 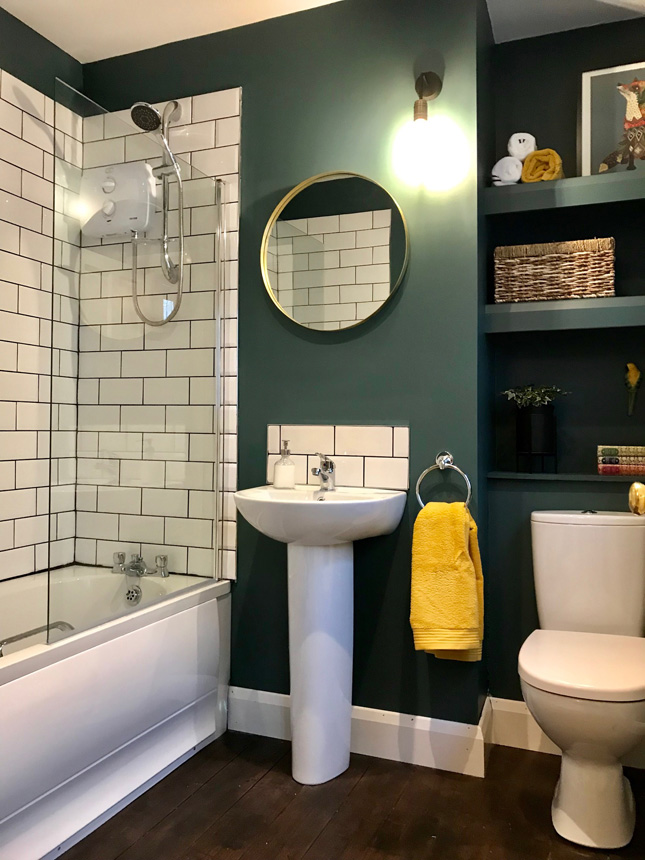 What made you decide to undertake this DIY budget bathroom makeover?

The bathroom renovation was done for my sister, Aoife and her partner Matt. They moved into their house three years ago and have been slowly tackling each room and renovating it. I wanted to help in some way and offered to do a DIY bathroom makeover on the main bathroom. The budget was very tight, but I wanted to show them that you don’t need a huge budget to renovate this type of room. It was  a challenge for me. I love trying to get a high end finish on a limited budget. I also wanted to share the makeover on my blog to try to inspire others to make over their own bathrooms.

What was involved in the project?

I firstly worked out a timeline for the work and a budget. I also did a mood board to help my sister visualise the finished bathroom. My intention was to have the project completed over four Saturdays. To keep costs down, I tackled any jobs I could myself, and Matt is very handy, which helped. He did the plumbing and electrics, so that was a huge amount of money saved from the get go. The first step was to strip out the old bathroom, which was in pretty bad shape. Once this was removed, we realised that the plasterboard behind the double tiling was in very poor condition, so we decided to remove this and fit new moisture-resistant plaster board. Once this was done, all the walls were given a coat of white paint. 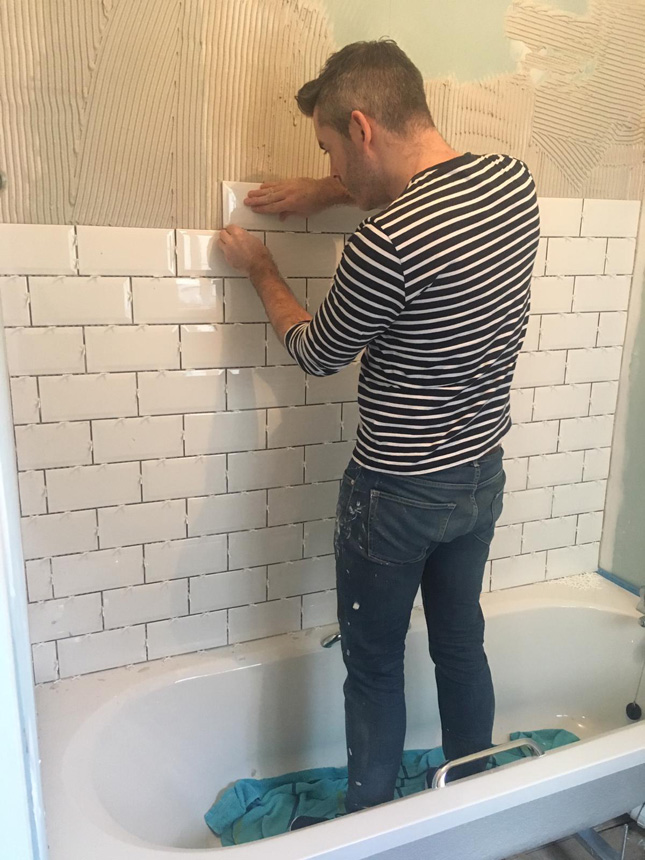 I sourced the bath, toilet, sink etc from a local plumbing supplies (CDV Supplies). They have a trade counter but sell to the public. As the budget was tight, I went for the basic, most cost-effective options they had available and they were a direct swap, which kept things simple. I sourced items during the week and did the work on Saturdays. The first thing to fit was the bath, so I could then start the tiling. The tiles are white metro tiles from Right Price Tiles and were €20 per sqm. They are inexpensive but look great. I chose to use black grout so the brick effect would stand out. I researched how to tile on YouTube and gave it a go. Thankfully it turned out really well. The paint colour I used is Inchyra Blue by Farrow and Ball. It is a gorgeous blue/green colour and makes the white metro tiles pop. This was a colour match from Fleetwood Paints.

Matt changed the old light fitting on the ceiling and installed two moisture-resistant spotlights. I would advise getting a professional to do this if you are unsure how to fit lighting. Then the sink, taps and toilet were fitted. I added two shelves to an alcove above the toilet and used some excess skirting board to face the front of them. These were then painted in with the wall colour. There is one window in the bathroom so I decided to make a blind using an Ikea roman blind as my template and recovered it with a tropical print fabric. It looks really cool against the paint colour and was super inexpensive to make - a great budget bathroom makeover tip!

The original floorboards were in great condition, so I sanded them and stained them with a Ronseal Walnut stain. They took three coats and for the first coat, I thinned it down with white spirits to ensure an even base coat.

Then I dressed the bathroom, hung the blind and mirror, added a shower screen and replaced the old white shower head from the electric shower. Baskets were handy storage solutions on the shelves.

Originally the budget was €600, however I ended up spending about €800 in total. The bath had to be replaced so that and new taps for it increased the cost. You could easily overspend on a bathroom as there is so much choice when it comes to tiles, fixtures and fittings. I felt it was important to try to stick to the budget though. When you only have a certain amount of money to spend, it helps you focus when you have to make decisions.

What did you spend the most on? Was it worth it?

About €450 went on the toilet, sink, bath and taps. That was the biggest cost, but it was necessary. The old bathroom suite was peach and shell shaped, so it had to go. Hopefully they will never make a comeback! The shower screen was about €80 and I could have opted for a shower curtain to keep the cost down, but I felt the screen looked better. 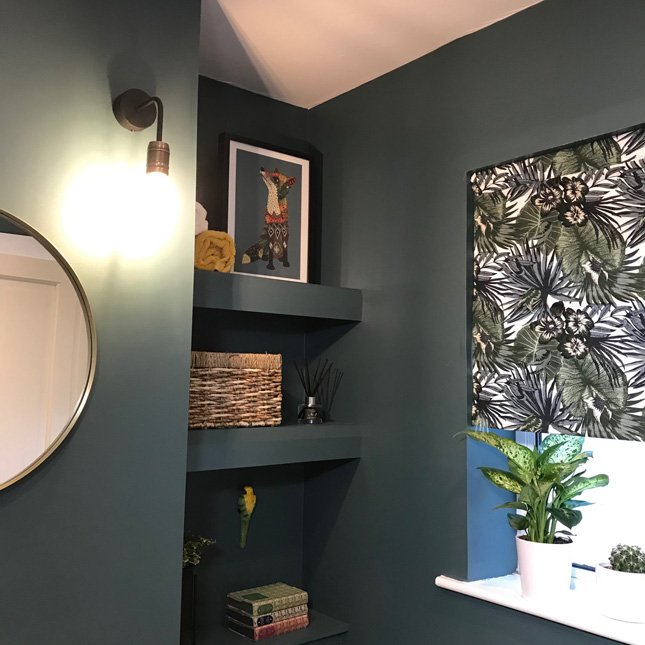 I was lucky that my partner's Mam had some of the tiles we were using left over from a job in her house, so she kindly donated them to the project. It is surprising when you ask around, who has stuff left over in their shed or garage. My Dad had two bags of adhesive which he gave me for the tiling. The floor stain was left over from doing my own floors at home. All these donations saved me money and helped stick to the budget. Making/upcycling the Ikea blind only cost about €40, which is cheap for a bespoke blind. I'd recommend everyone to give that one a go. It looks really expensive and ties the room together.

What surprised you most?

The difference in tile prices surprised me. When you add on VAT it is more expensive again. Once you buy the tile trim and the grout, it all adds up. I would have loved to have had the money to buy more stylish taps, but they can be really pricey too. If I did it again and had a longer lead in time, I would try to source taps online. Black matt ones would look great in this bathroom, but they are a thing that are easy to refit when you have the money. 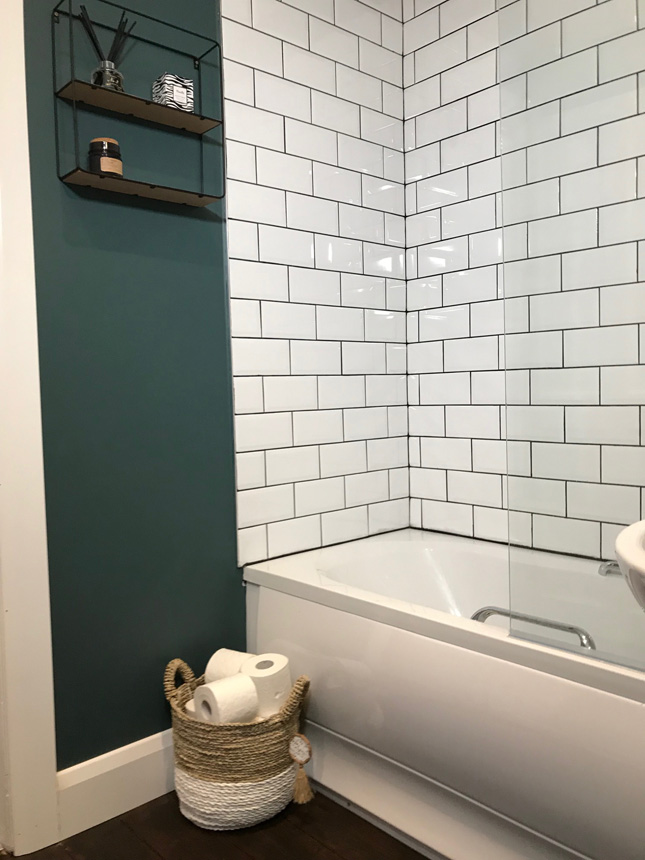 If the budget was limitless, I would have knocked into the en suite which is behind the bathroom and made it one large room with a free standing bath and large wet room style shower. I am really pleased with how the bathroom turned out on such a tight budget. Both Aoife and Matt are thrilled with the end result and how much money they saved and that is a win win for me!