Paul and Pawel blast the age-old design rule, that small spaces should be painted in pale colours, in their daring Dublin city apartment. 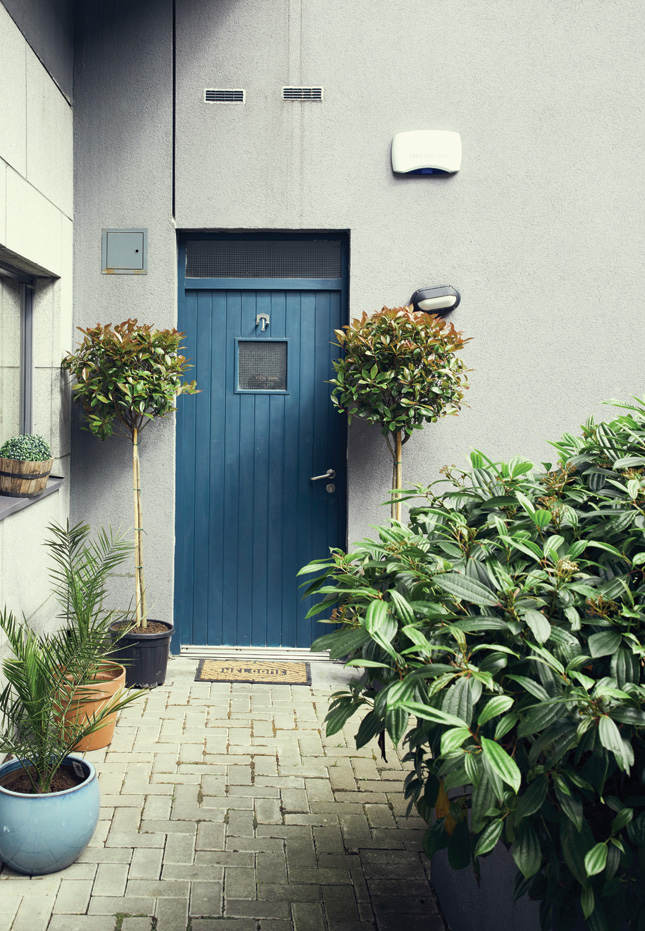 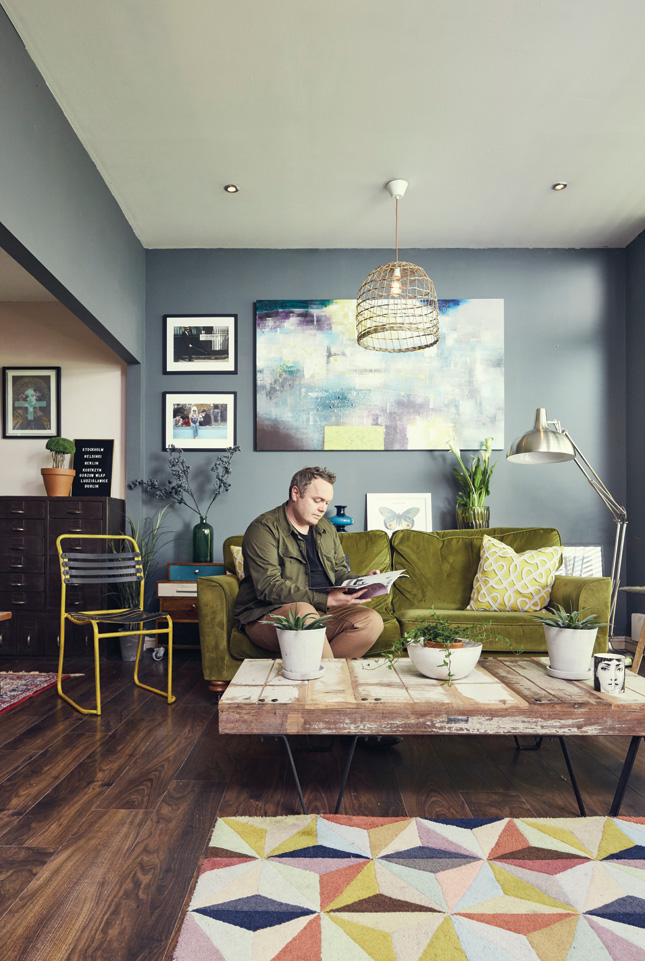 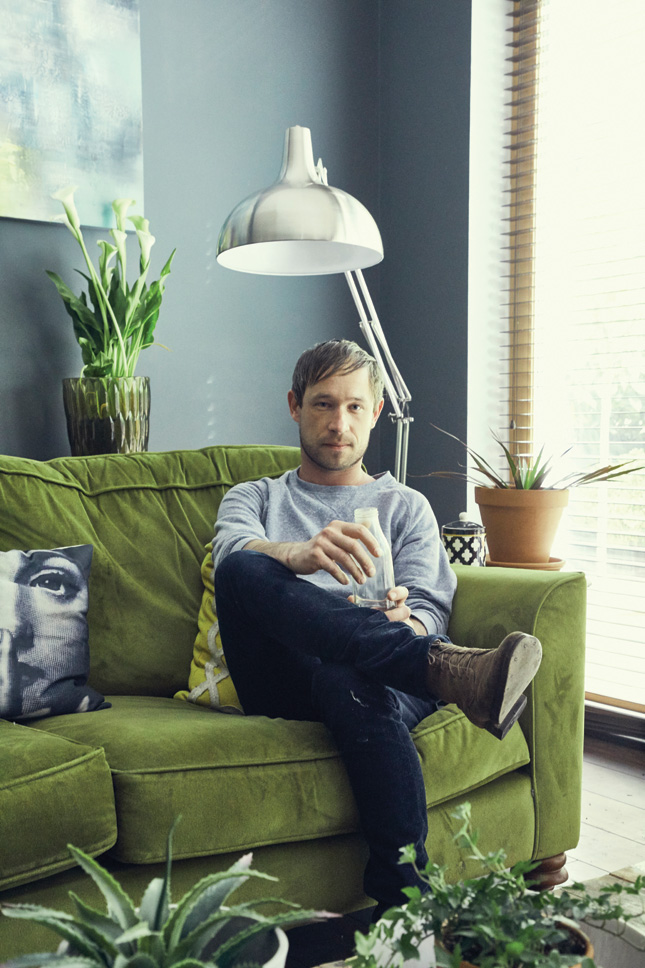 On a sunny morning in Dublin, we took a leisurely walk along the quays to meet Paul, a chef from Ballyfermot who has been living in his city apartment for the past eight years. We knew that this home tour would be brilliant lesson in how to decorate with darkness, even if space is at a premium, yet nothing prepared us for what was behind the front door of Paul’s unassuming home on Usher’s Quay, Dublin 8.

Greeted by a large, powerful Cuban lady print for BoConcept, we knew that Paul takes interiors seriously. I could have stopped there, taken a seat and picked up a good design book, of which Paul has plenty, gracing the carefully chosen coffee tables and shelves in his home. 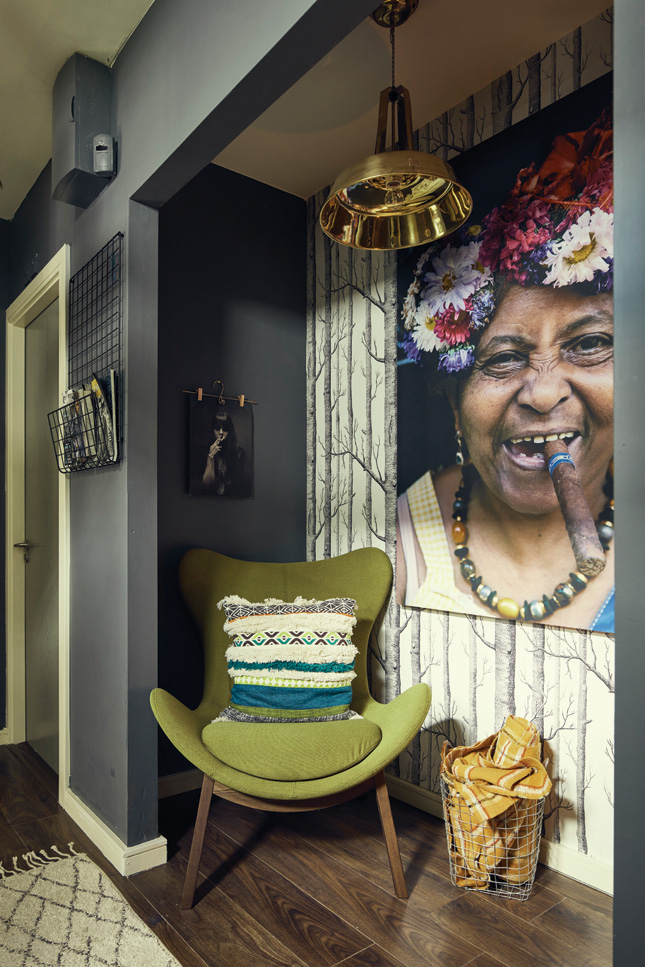 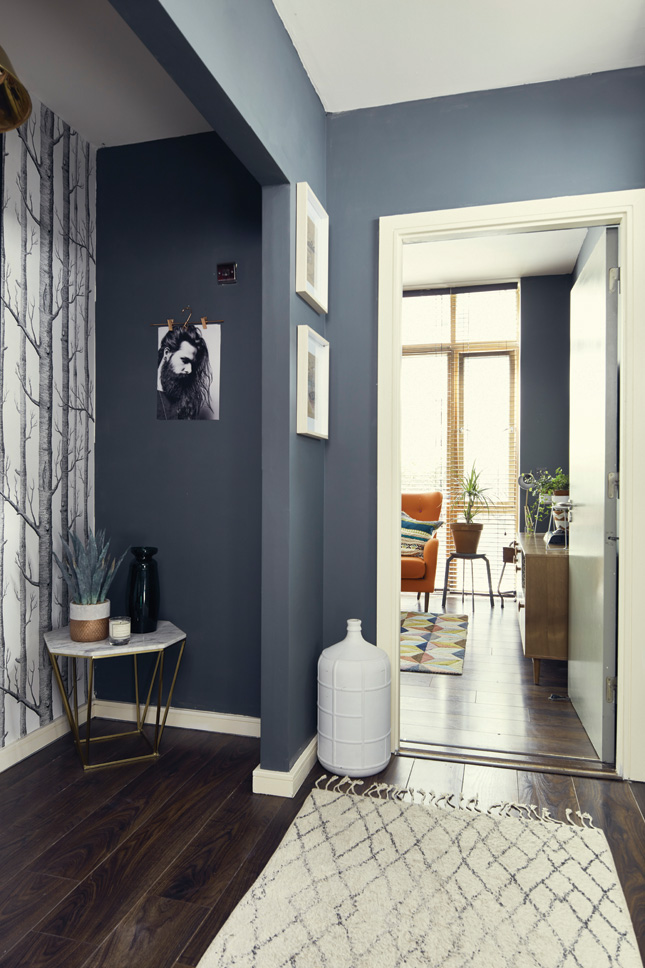 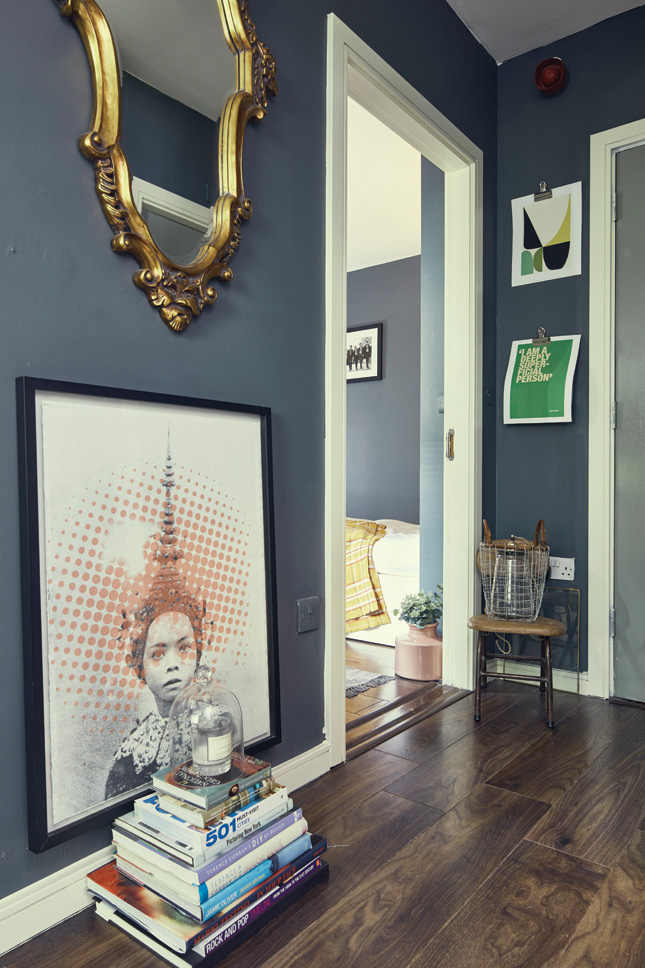 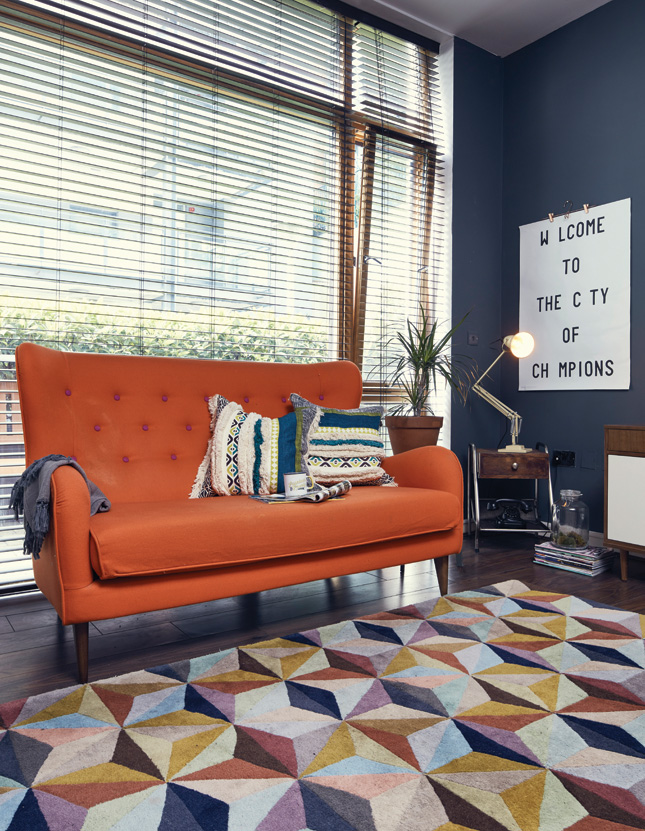 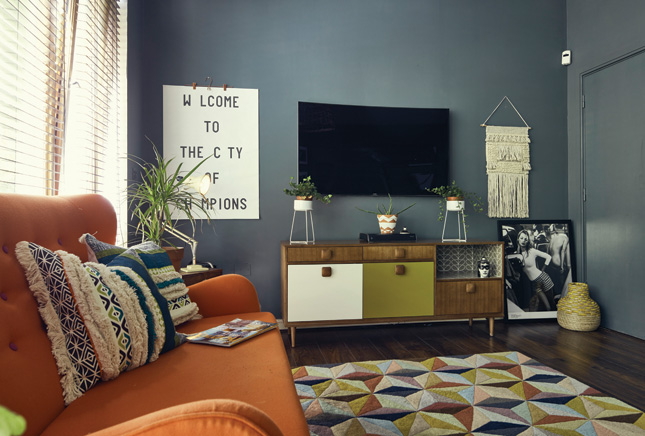 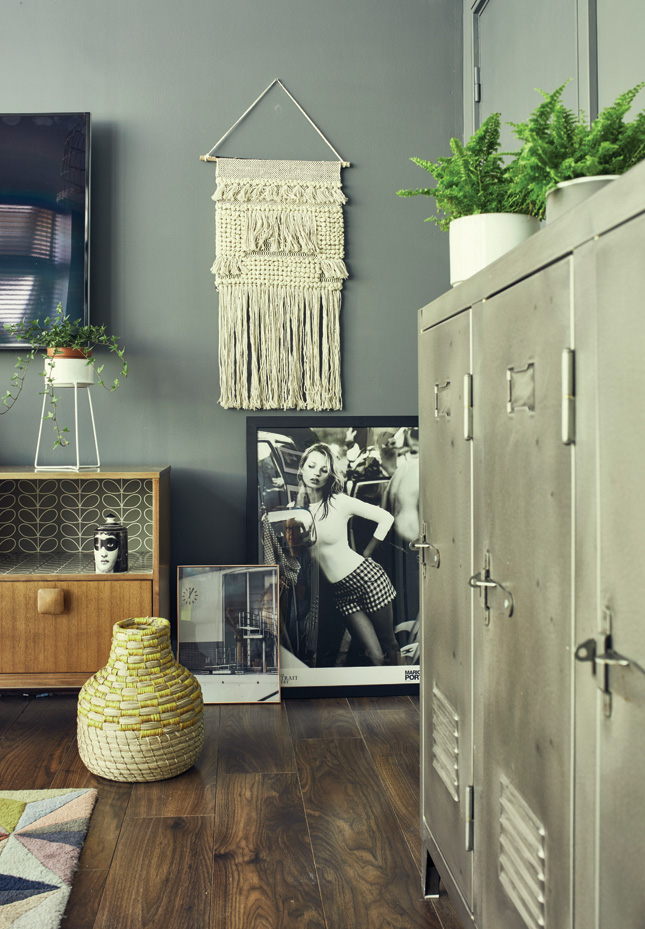 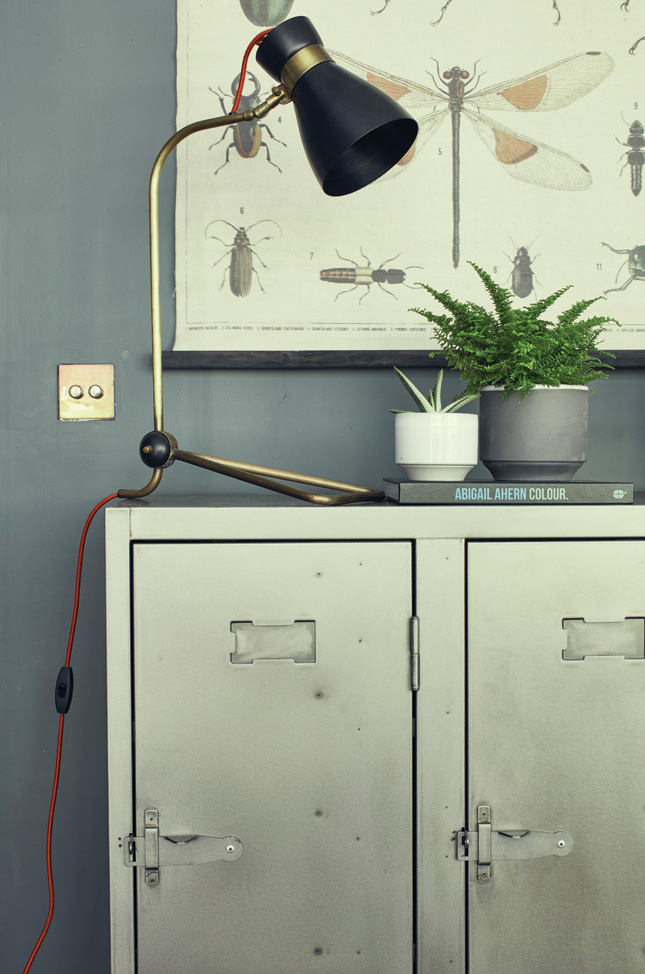 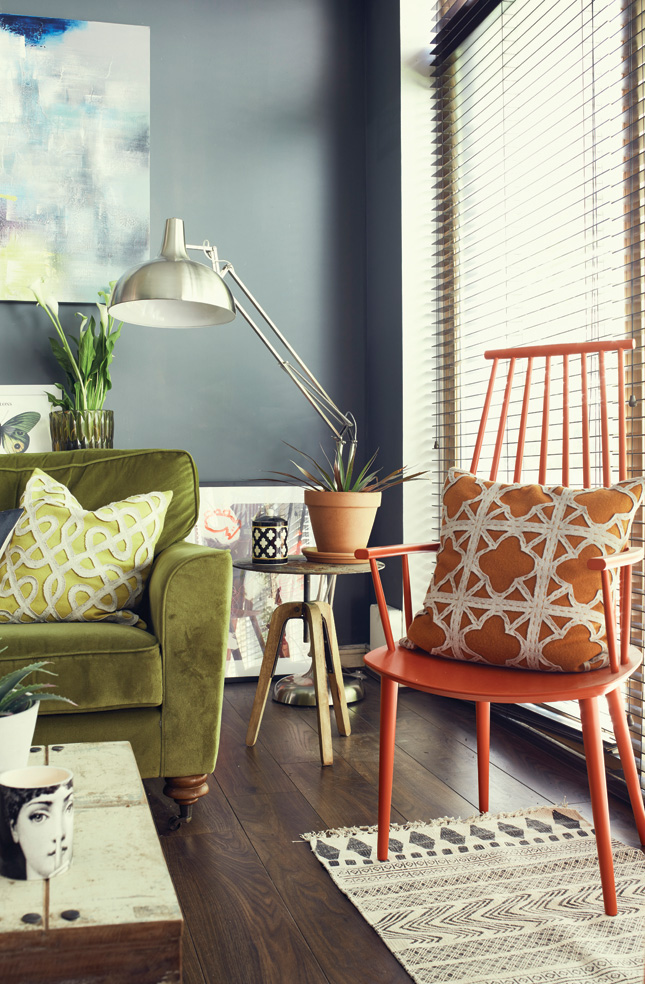 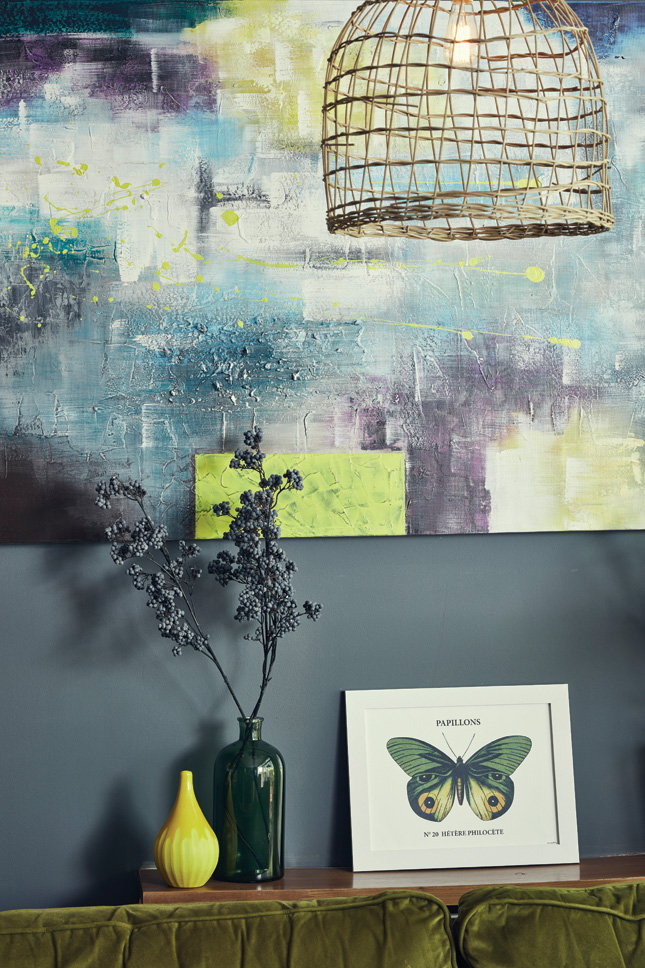 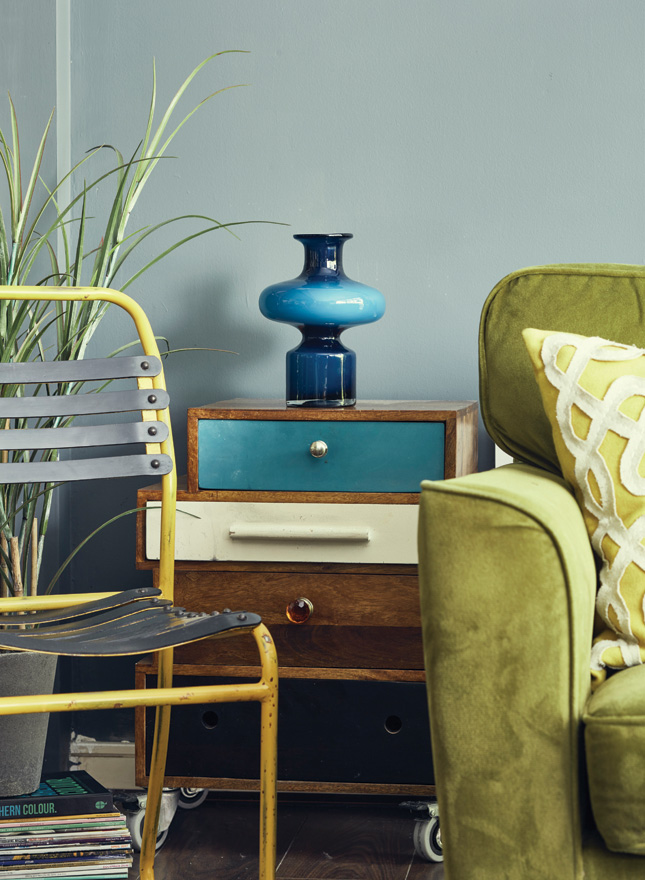 But, as we're lead into the sitting room, we realise that there’s so much more to discover – very impressive for an apartment 70 sqm in size. “The kitchen was closed in, when I bought the place, so I knocked the wall down. I did similar in the hall,” says Paul, referring to the previously mentioned reading nook. “There was a whole fitted kitchen in this space, and it wasn’t very nice. Seeing as there’s only two of us living here, I took it out,” Paul continues. Lucky for him, his brother, Aidan, is a kitchen fitter. He made the cabinets and countertops, as well as fitted them, as he also did with the rich brown floors, throughout the house. “I bought the sink, second-hand, so the installation and plumbing cost more than the piece itself,” Paul says, highlighting the irony.

The kitchen is set against a backdrop of white subway tiles and Farrow & Ball’s Calamine, a blush pink hue that brightens, and provides contrasts, to the rich woods and dark metal storage unit Paul picked up at Industry & Co – a piece he states is probably his favourite buy in recent times. A quick glance at this space and you’ll see that deciding on a favourite piece would be a tough job; the iconic retro SMEG sits in the corner of the kitchen, and a green velvet sofa and an orange two-seater make ideal bedfellows in the living area.

Veering away from grey or white walls may be why this room works so well, ensuring it’s more Abigail Aherne than Irish tricolour. Farrow & Ball’s dark and moody, Downpipe, ensures that Paul’s artwork pops and his furniture choices really stand out. An Orla Kiely sideboard with her famed print, modestly displayed within the shelving, proves that Paul is a fan of designer but isn’t ostentatious about it; he lets the shapes and forms of his piece do the talking, rather than the labels. 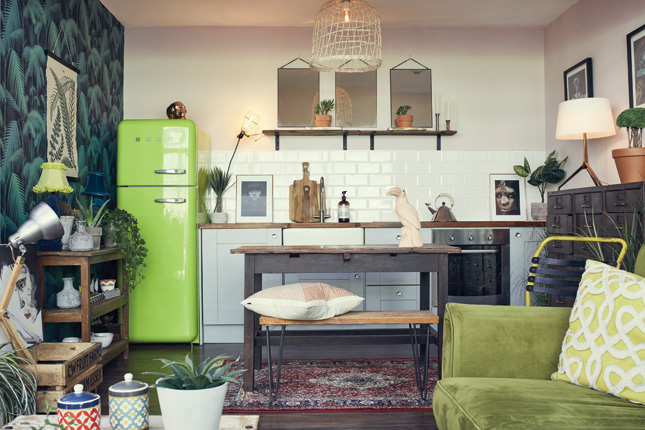 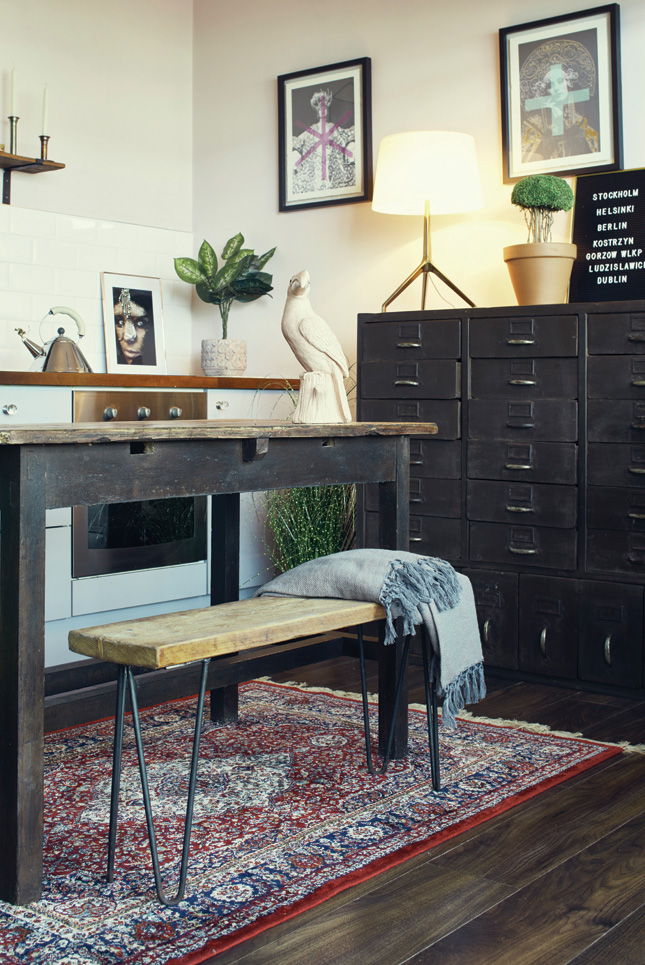 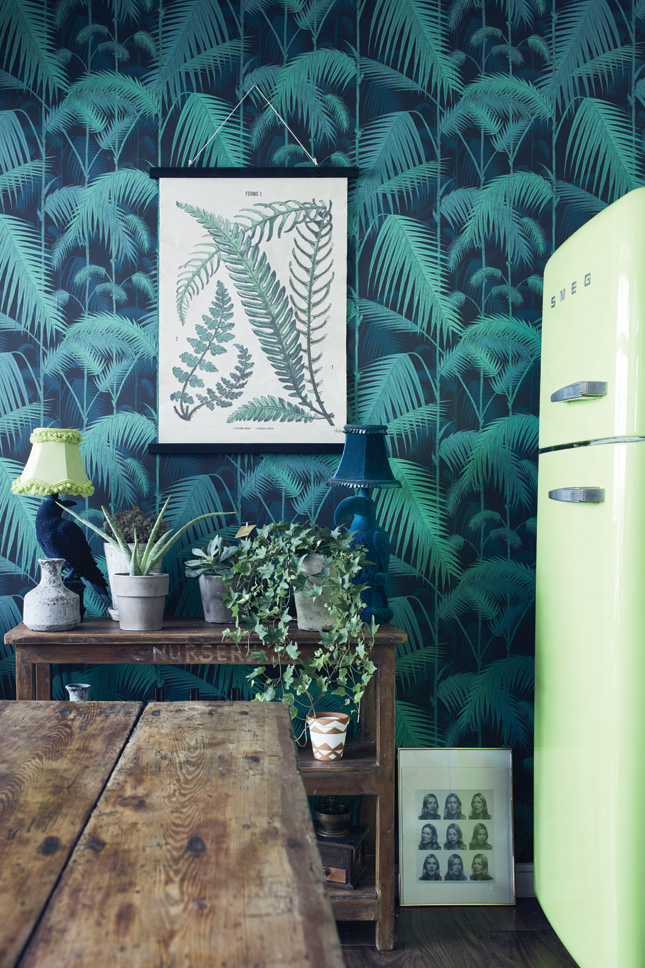 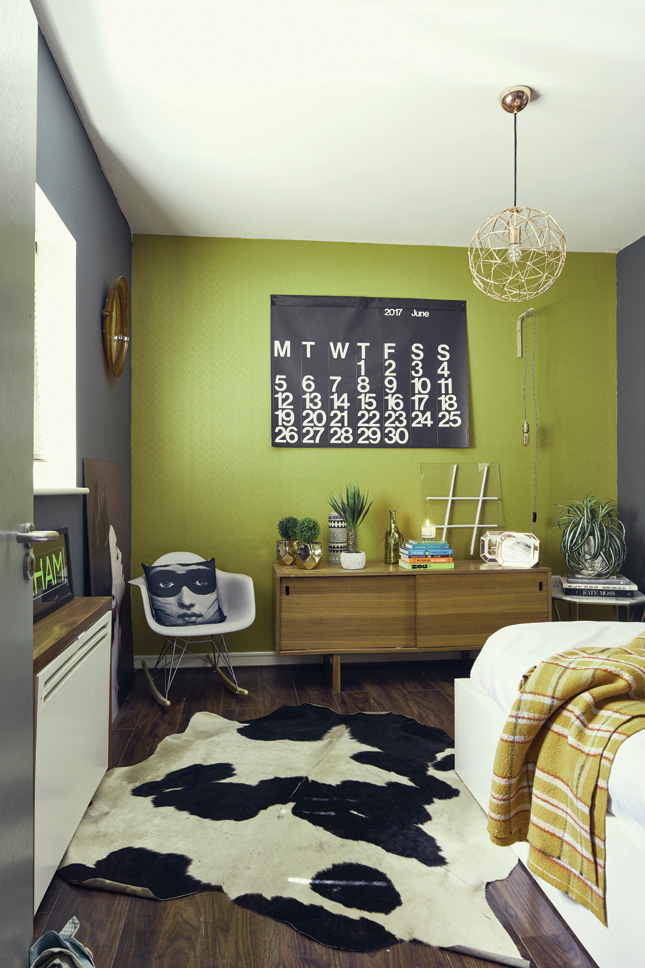 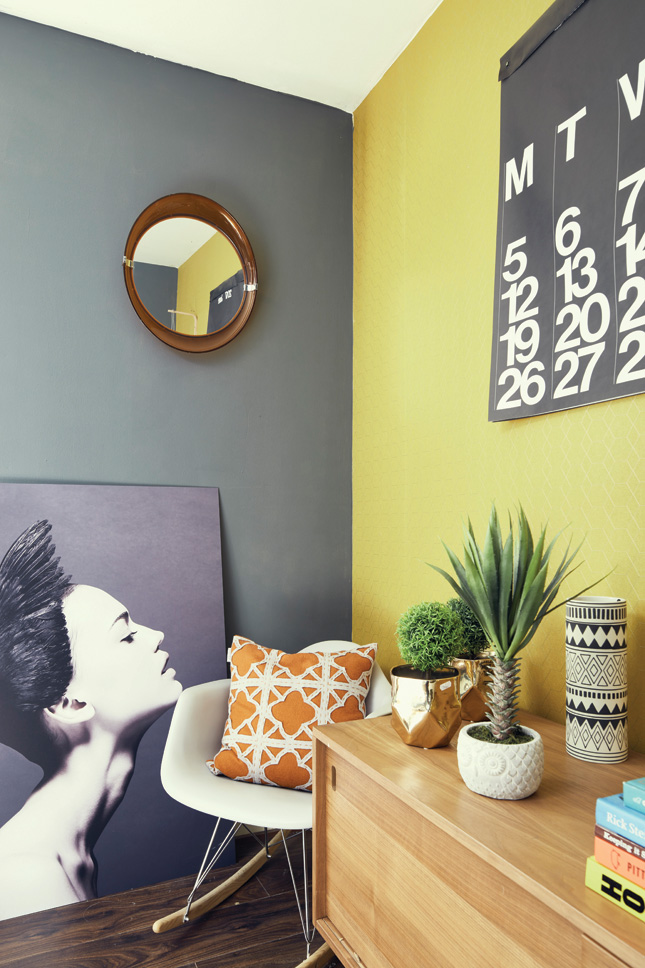 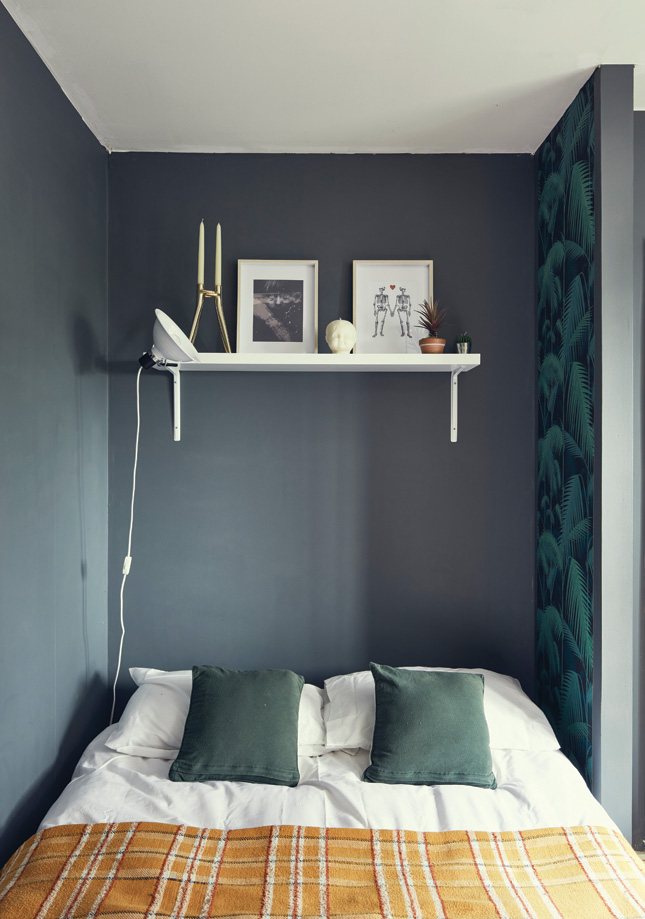 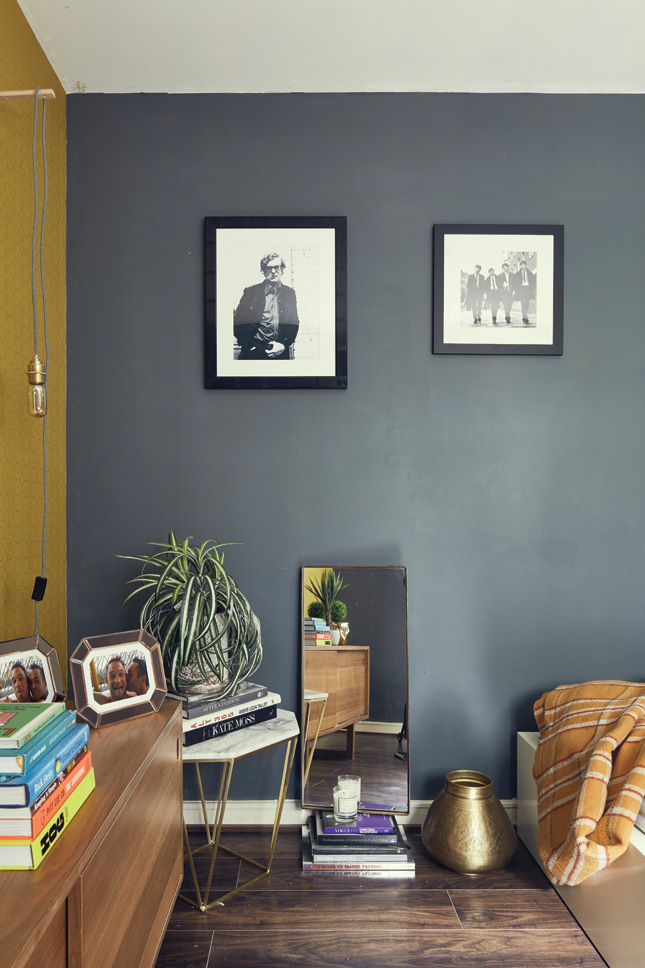 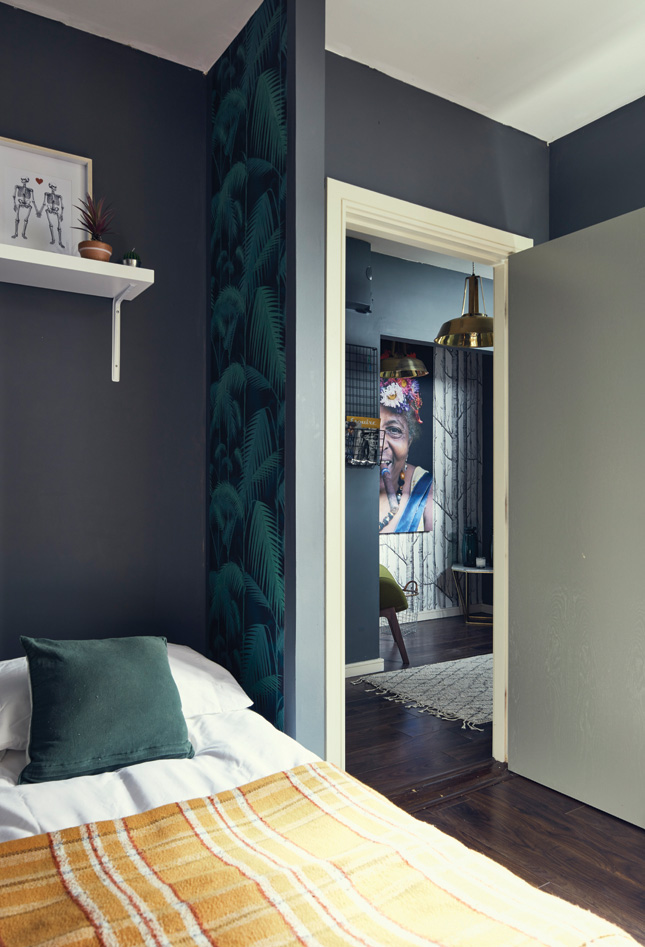 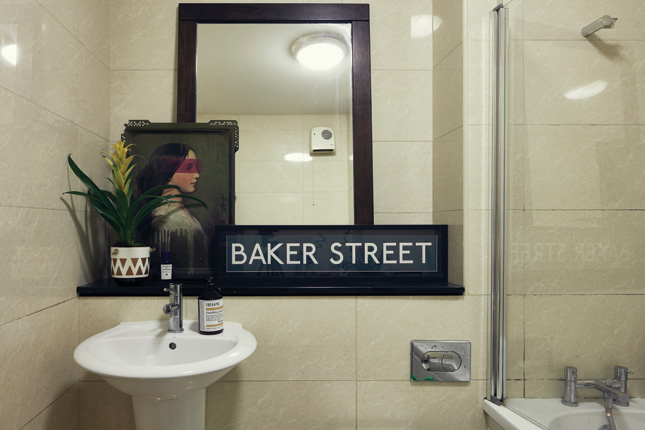 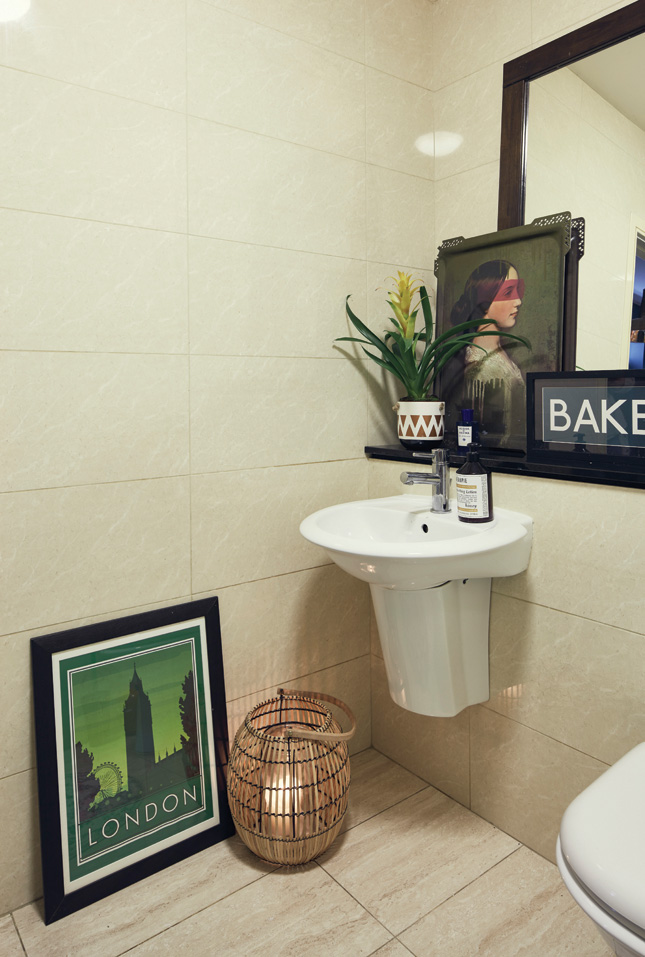 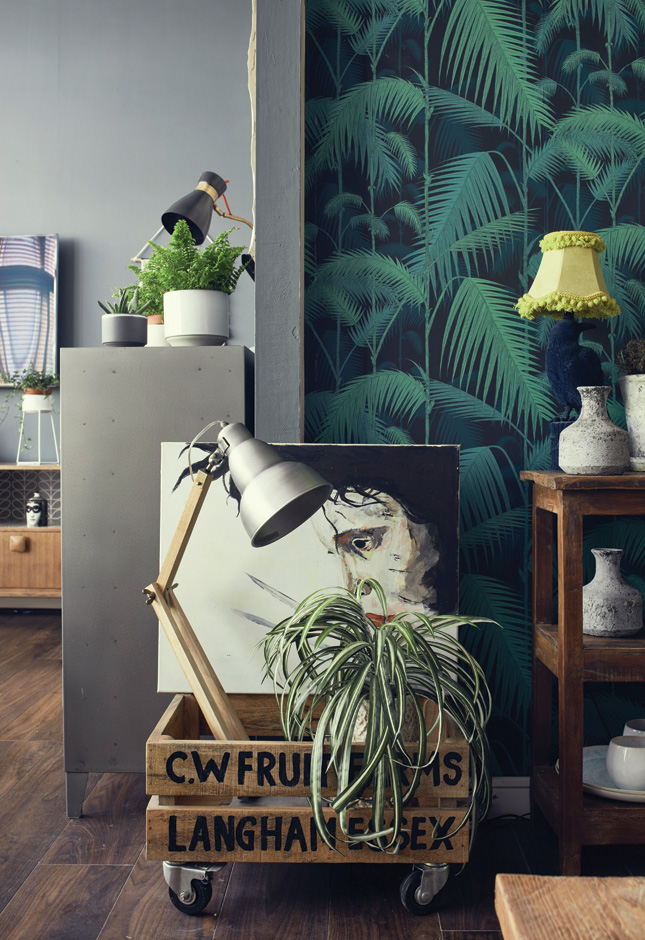 “I’m constantly updating,” Paul says. “If you were here next month, things would be different again. I’m sure I kind of annoy Pawel, when I’m constantly moving things around,” he jokes. There is one area that Paul simply can’t wait to revamp, and that’s the bathroom: “I don’t like the bathroom at all, so I’m going to get that done next. I want to take the bath out and have a walk in shower with a brass shower head,” he says, which I could already imagine in my head as a nice contrast with the blue/grey subway tiles he wants to cover the walls in.

Paul knows that a bathroom overhaul can be a costly job, so for now, he’s focussing on affordable ways to update his space. “I have a lovely a west German locker, in storage, that I picked up in Industry. I want to put it in the hall,” he says.

A tour of Paul and Pawel’s home just proves that their interiors style is a true reflection of what they do for a living as a chef and a barista; they combine perfectly measured ingredients for the most impressive results.