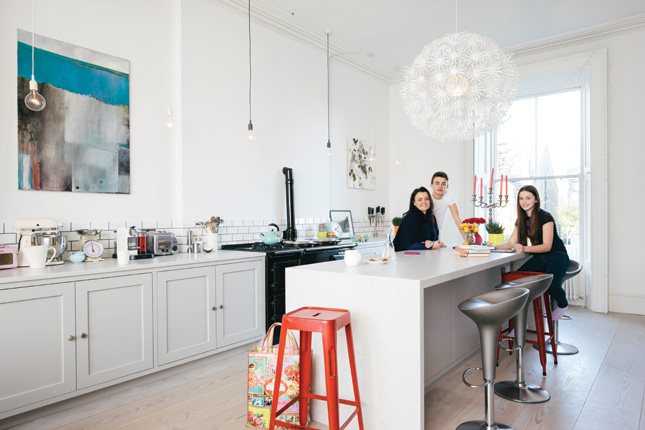 Having decided to move back to Ireland from London, Sharon Beggan, an interior designer and her partner Declan McEvoy, were keen to find a home that would suit them and their three teenage children, Oisin, 17, Tadhg 14, and Siofradh, 12. It was the elegant exterior of this Victorian home in Dublin that drew their attention and they could see that with a lot of work the interior could be equally as striking and had the potential to be transformed into a spacious family home.

‘We could see from the start that the house was basically sound, it had lovely proportions with a charming staircase leading up to the front door,’ says Sharon. ‘Even though it was split up into a warren of bedsits and offices the shell of the rooms were there, all with lovely high ceilings with many of the original features intact.’ 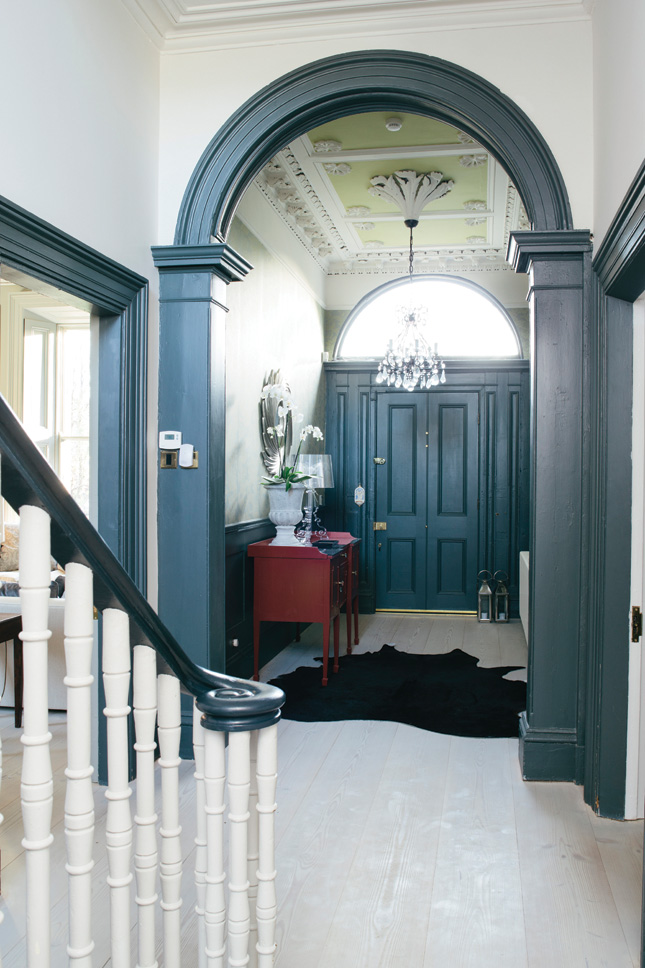 HALLWAY Sharon had wide planked flooring laid in the hallway and the dark grey paintwork, used on the architectural features, creates a striking effect. The archway and woodwork is painted in Farrow & Ball’s Downpipe Estate Eggshell with the side table in Incarnadine Estate Eggshell. The Koldby cow hide is from Ikea. The Kartell Bourgie table lamp is John Lewis. 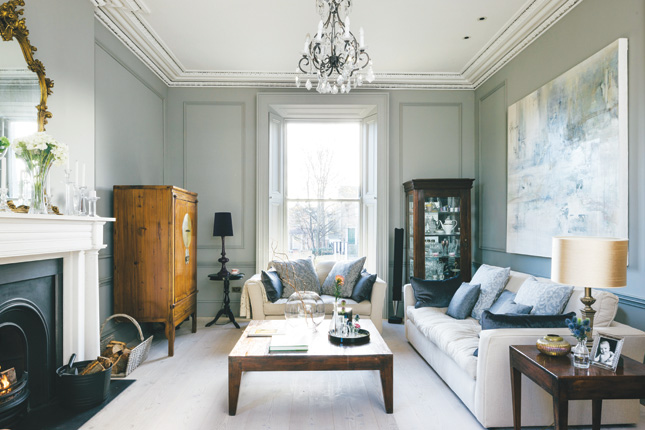 LIVING ROOM The elegant sitting room has modern sofas and art work that blend perfectly with the traditional backdrop for an eclectic look. The walls are painted in Elephant’s Breath Estate Emulsion by Farrow & Ball.

Having studied interior design Sharon had strong ideas on how she wanted the house to look. ‘It’s a protected structure so we had to adhere to very strict planning regulations- we weren’t even allowed to change any of the glass in the windows- and had great problems convincing the planners to allow us to have the kitchen on the first floor. We actually didn’t add anything to the house; we just bought it back to life and updated it, while still preserving all the original features.’ The couple decided to tackle the project over a period of three years. ‘Although the house needed alot of work we didn’t get it for a bargain, so we had to be clever with the restoration and allocate our funds accordingly,’ explains Sharon.

The first stage was to gut the whole building, rewire, replumb, fit a new heating system and insulate. Then all the original cornicing and ceiling roses were restored and layers of paint were stripped off the shutters, most of which were all in good order. ‘Some of the fireplaces were missing so we went to great lengths to source replacements that suited the period of the house,’ says Sharon. ‘ We also put in a new staircase leading from the basement to the first floor and incorporated one of the smaller bedrooms into the master bedroom to make an en-suite and walk in wardrobe.’ 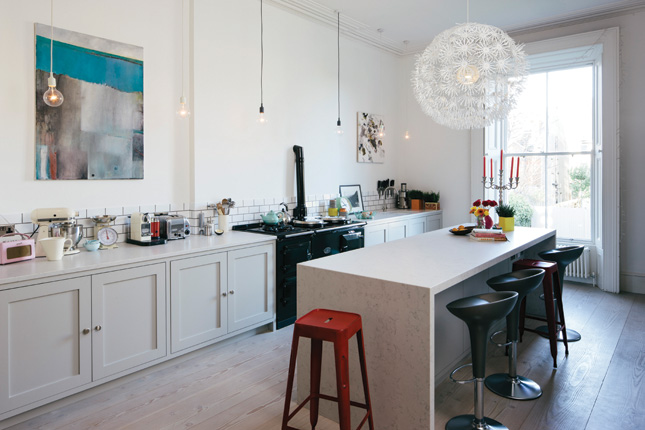 KITCHEN The four door pewter gas Aga gives the room a more traditional look and makes the space lovely and warm in the winter. The Shaker style kitchen was made by NewcastleDesign. The Retro Metro Swiss Cottage tiles are FiredEarth and the Magis Bombo bar stools in graphite are from John Lewis. 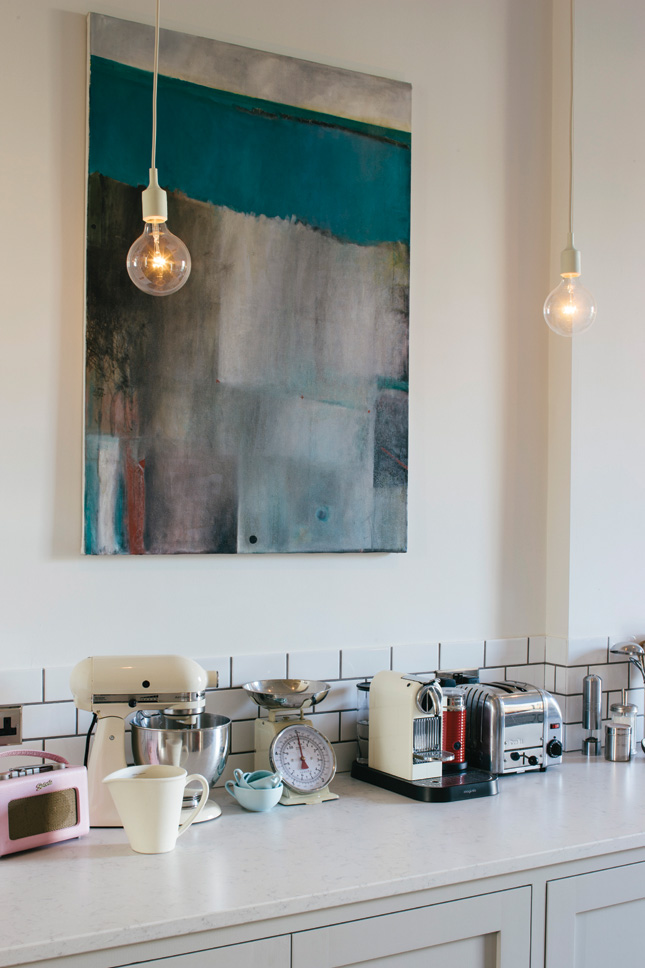 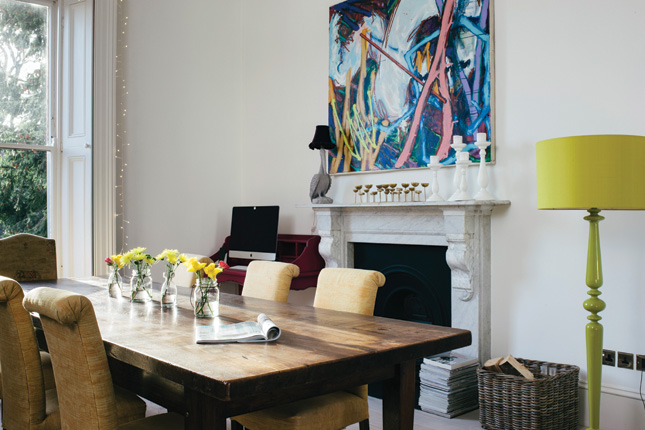 Once the major structural work was done Sharon could turn her attention to the decor and finishings. ‘I wanted the house to be a bit different and have a slightly contemporary twist to it. So my ideas started with the floors I found the Dinesen wide planked Douglas Fir flooring, and knew it was exactly what I wanted, it had to be ordered from Denmark and have specialist fitters, who came over from London to fit it. I decided to use this on the entire first floor, which really gives the house a modern feel, and ultimately dictated my choice of kitchen, and choice of palette of greys and strong whites from Farrow and Ball.’ 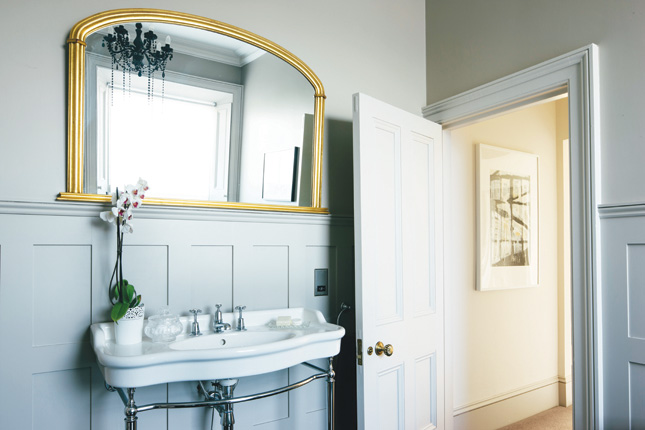 BATHROOM Sharon teamed a traditional bath with a modern shower for a more eclectic look. The Retro Metro Swiss Cottage tiles, as in the kitchen, are from Fired Earth 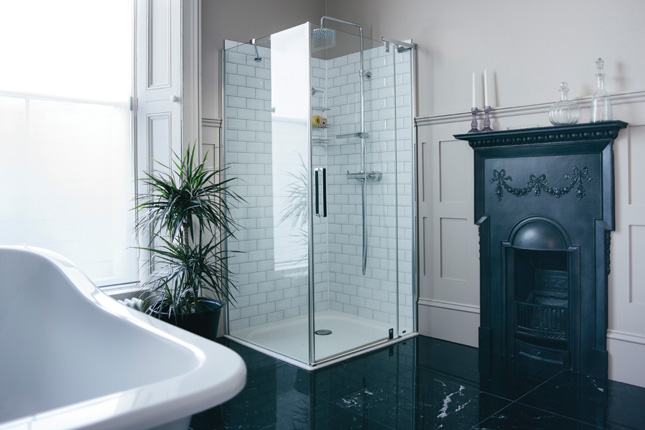 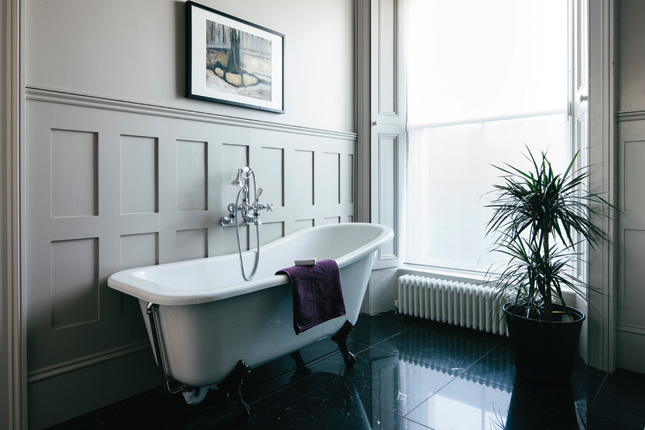 The kitchen was one of the last jobs the couple tackled. They had fitted an Aga but had been living with a make shift kitchen over the years, waiting until they had the budget for a bespoke scheme. ‘I love the simplicity of the Shaker-style units, so the design was based around this,’ explains Sharon. ‘It had to be simple and uncluttered, with a slightly traditional look to it. I didn’t want any wall hung cabinets but needed plenty of storage so it has a bank of tall cabinets to one side and low cabinets to the other side, and to give more workspace I had a super modern central island made. This space also houses a large dining table, so it’s now the hub of the home,’ says Sharon. 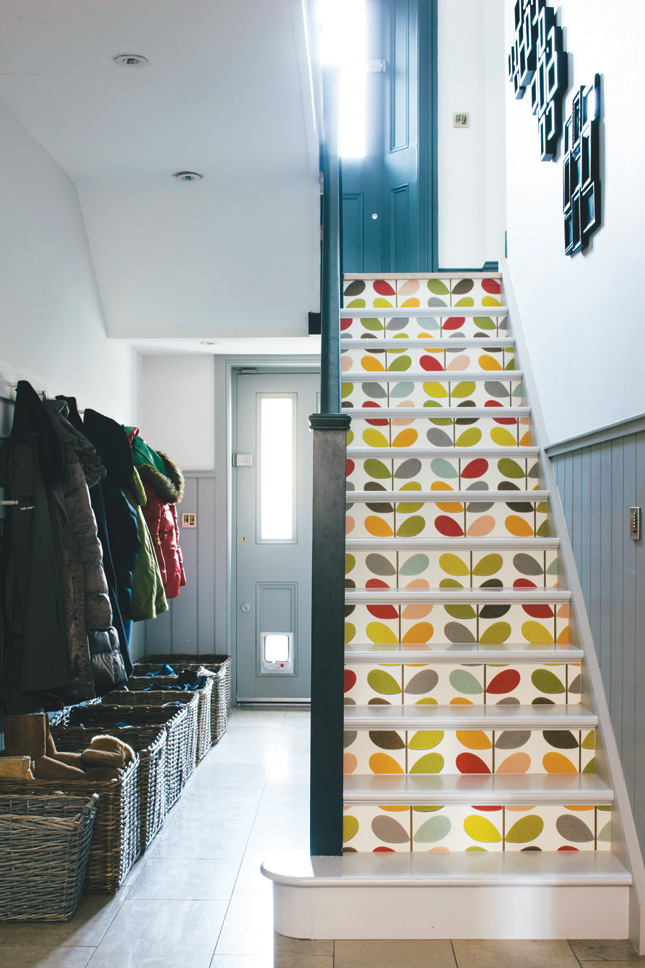 STAIRWAY For visual effect Sharon wallpapered the stairs to the basement with an Orla Kiely wallpaper. bought from Harlequin at 13 Castle Market in Dublin 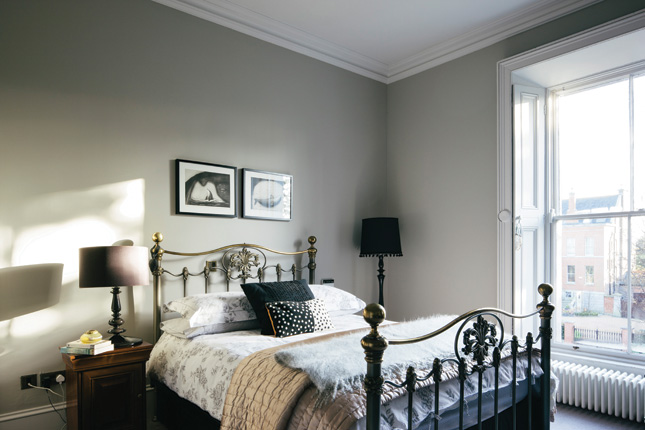 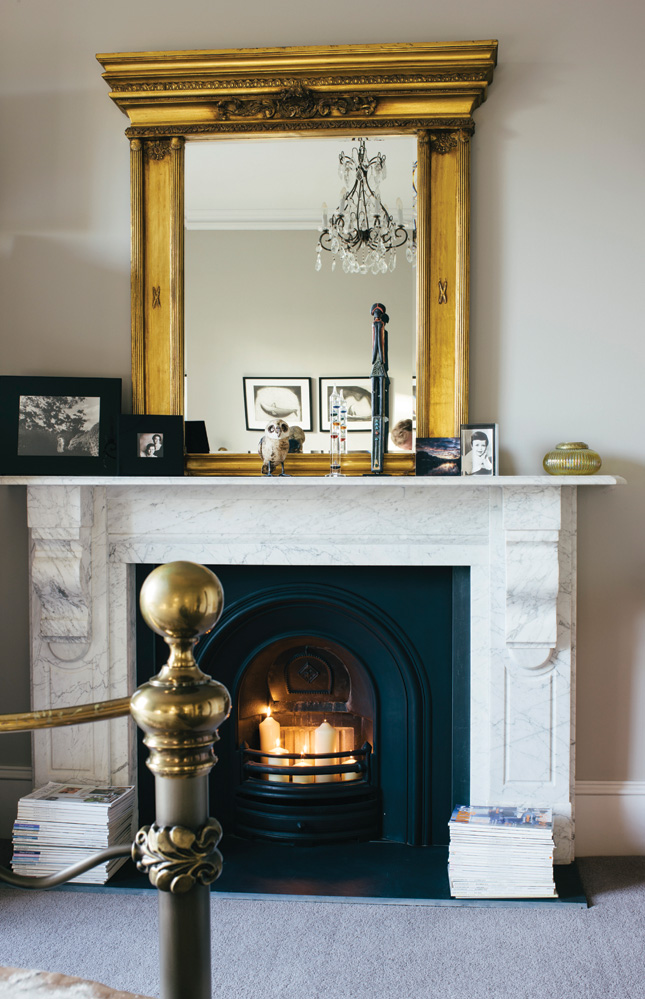 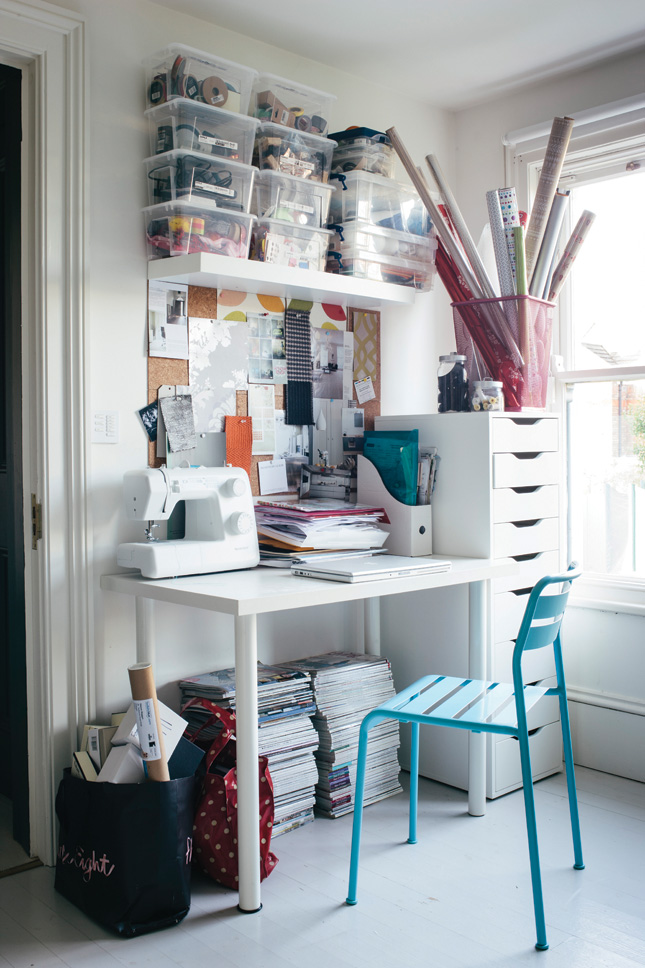 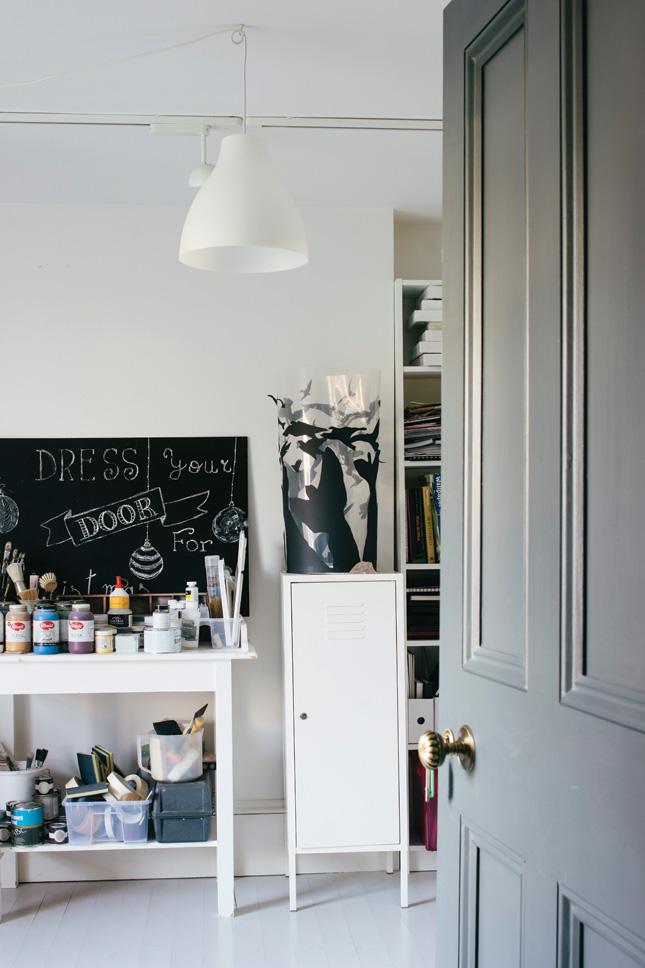 Although the project took a long time to complete Sharon and Declan have certainly managed to bring this period house up-to-date, creating a bright, practical and comfortable family home without loosing any of its period charm. ‘We are both really pleased this house is now a home, it took some time to get the house finished but it was really worth the wait.’

This real home originally featured in our July/August 2015 issue.