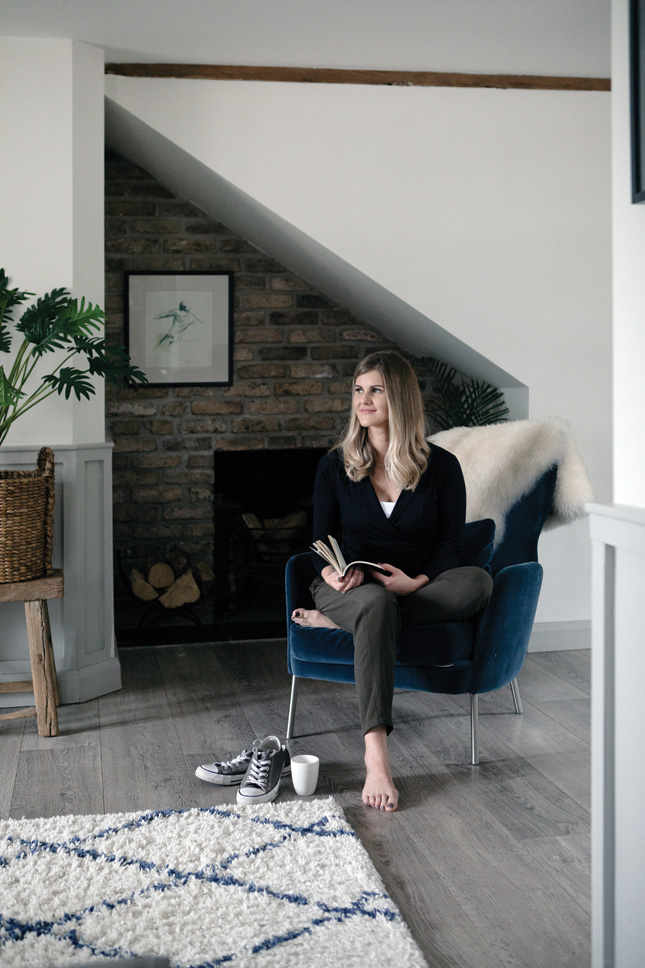 A tumbledown cottage doesn’t immediately spell family home, but Geri O’Toole (@geri_designs) saw the potential in the pile she now lives in with husband Cathal, four-year-old Finlay and dog Baxter. “It’s an old farming cottage on the grounds of Mountshannon House which dates back to the 18th century. When we acquired it in 2014, it was totally derelict: the roof was gone, there were no windows and it was overgrown with trees,” she recalls.

The layout, location and land around the house sparked something in the interior designer and, along with her husband Cathal, she set about a total renovation. “The footprint downstairs – there was no upstairs – was decent. We left the fireplace where it was and created an open-plan living space. It’s on three-quarters of an acre and, while we’re near to everything, we still feel like we’re in the countryside.” 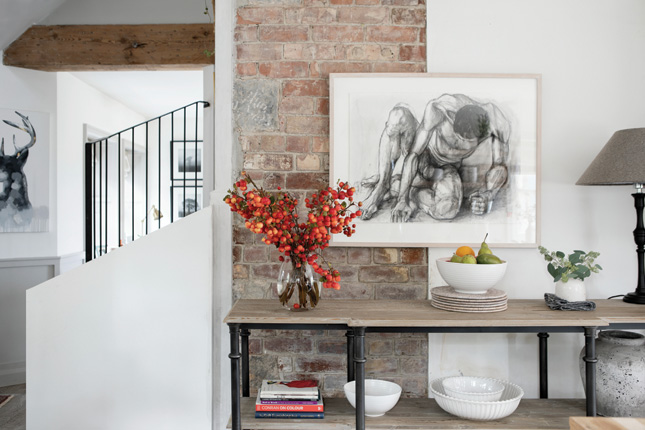 The freestanding unit was picked up at a show in Paris and combines Geri’s love of industrial and natural elements. The artwork is another auction find. “I have a Japanese obsession and love charcoal drawings and body studies and I couldn’t pass it up.” 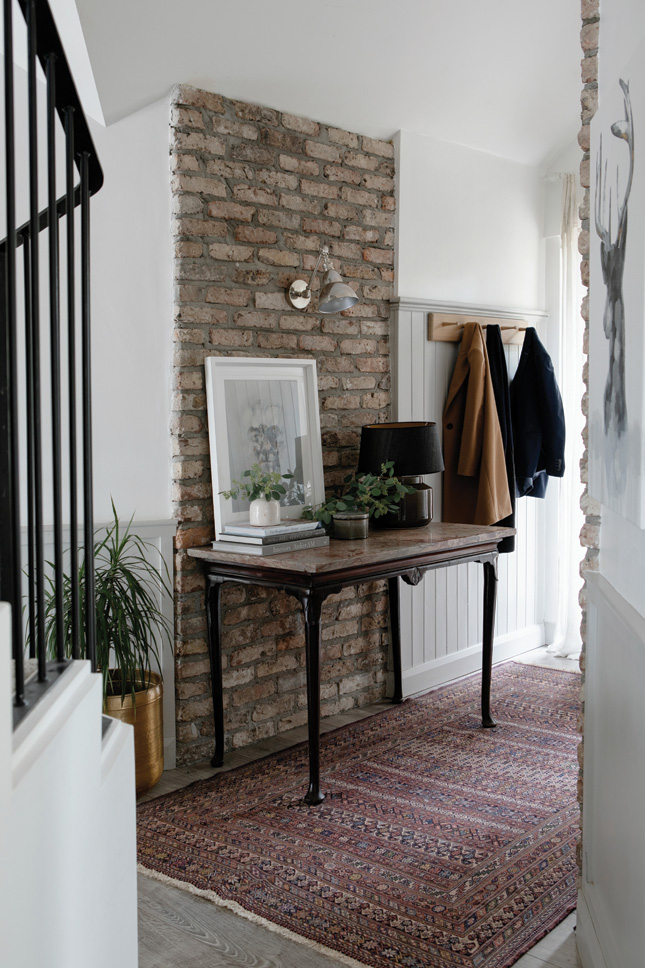 Cathal made all the panelling throughout the house which Geri kept neutral. “I didn’t want to have to change it too soon so the French Grey from Little Greene worked really well there.” The Neptune kitchen (Neptune.com) is painted in the brand’s charcoal plus a pink shade called Plaster V from Colour Library (Paintandpaperlibrary.com). 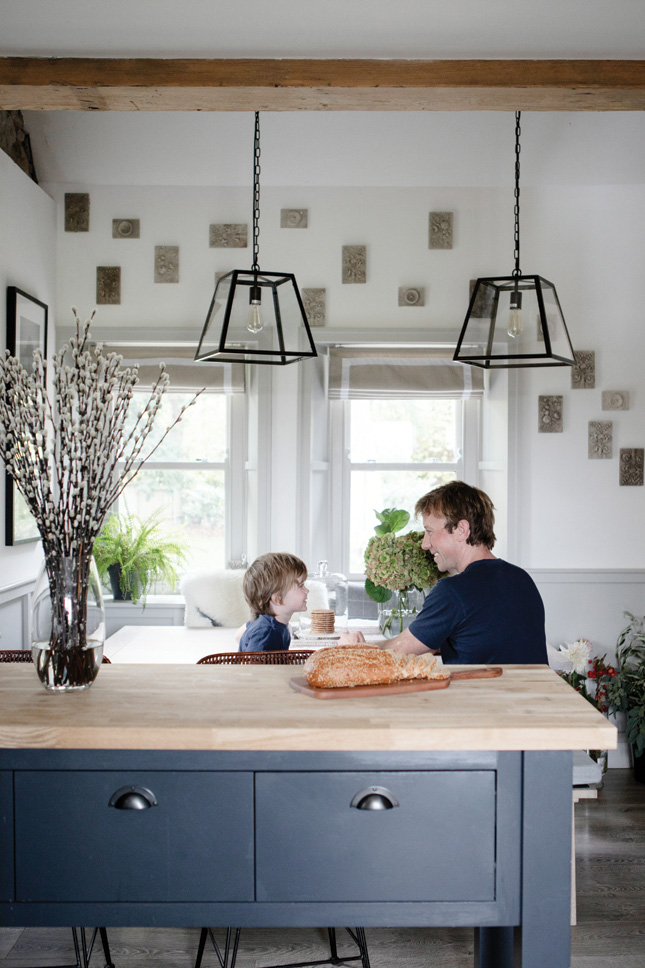 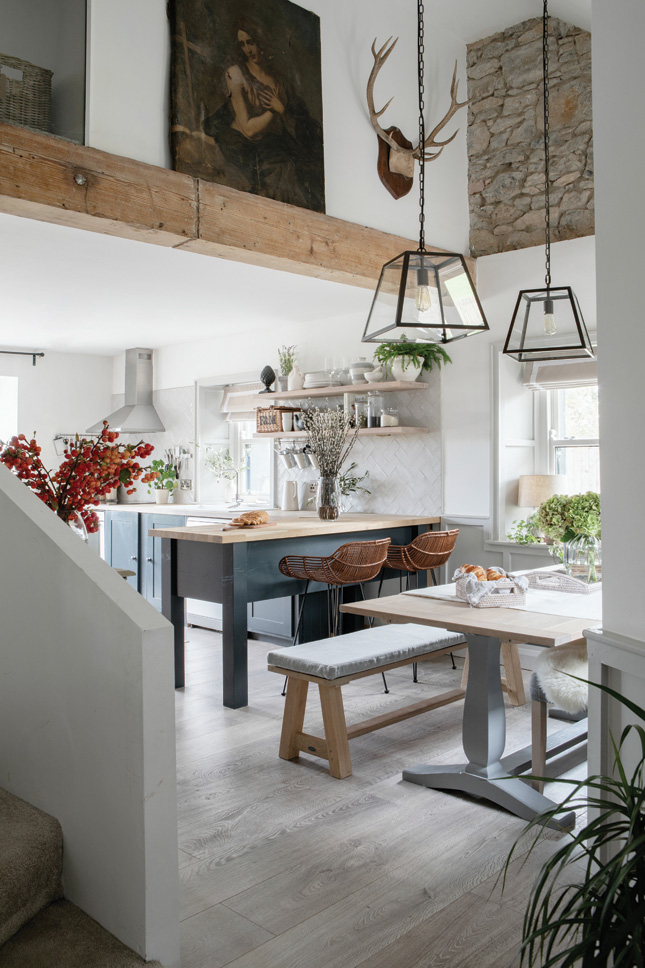 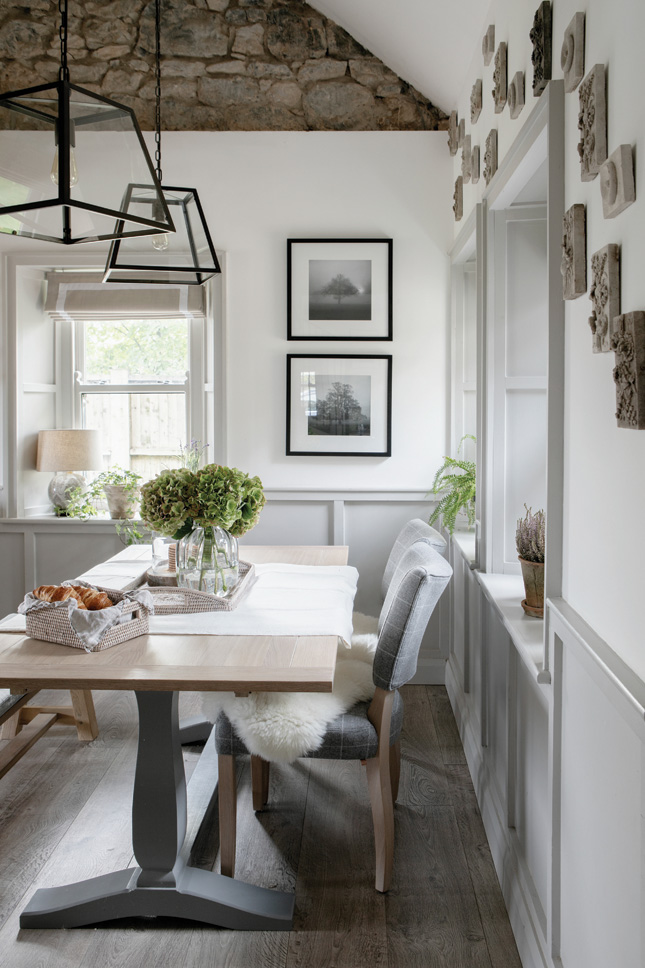 Geri sought to create the traditional elements of cottage life and Cathal, a carpenter with his own construction company, was tasked with making all of the wooden sash windows and the panelling throughout the house.

A restful, natural palette of white and grey is used throughout the house which Geri, owner of Geri Designs (Geridesigns.ie), admits was a somewhat instinctive choice. “I was renovating the showroom I worked in at the time and we had a young child as well as renovating the house, so I just picked a colour. Because it’s open plan and there aren’t the high ceilings that you see in a new build, I felt white was a great backdrop colour and the exposed brick was reused throughout the cottage, so there was no waste.” 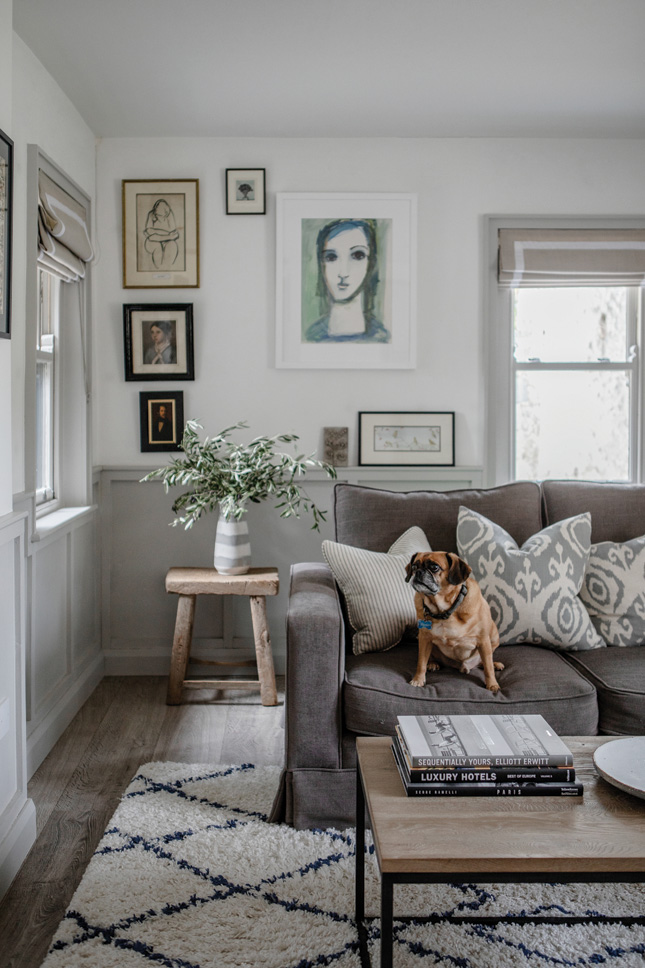 The gallery wall is a mix of the meaningful and the amusing. “The little bird picture was painted by my mother who passed away when I was quite young. The five birds represent one for her and four for her daughters.” A lithograph was picked up on her travels, as was the Emil Nolde etching which sits alongside the Rosie Smith painting of a young girl. 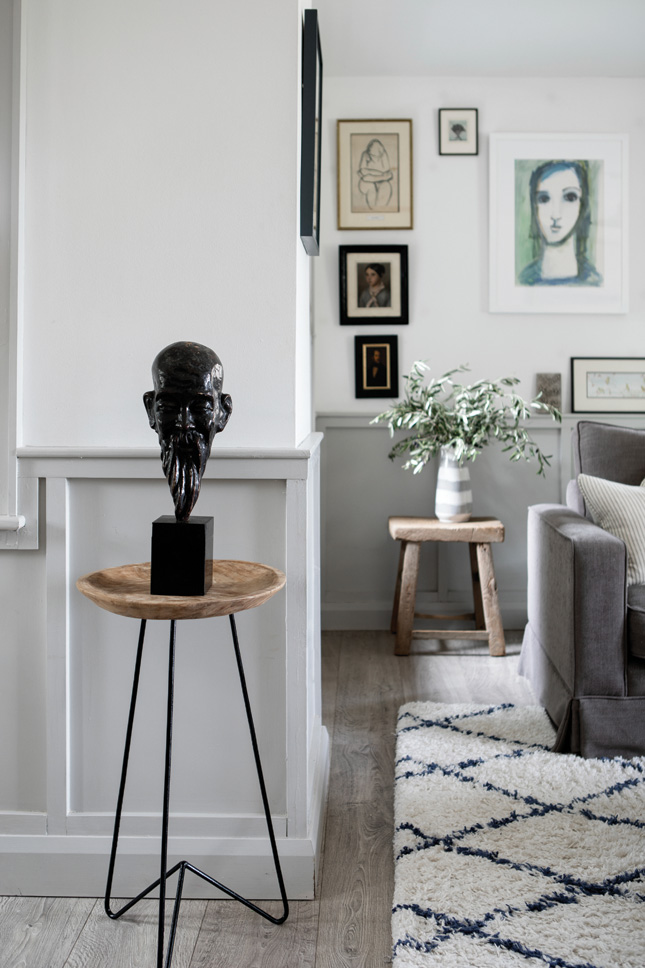 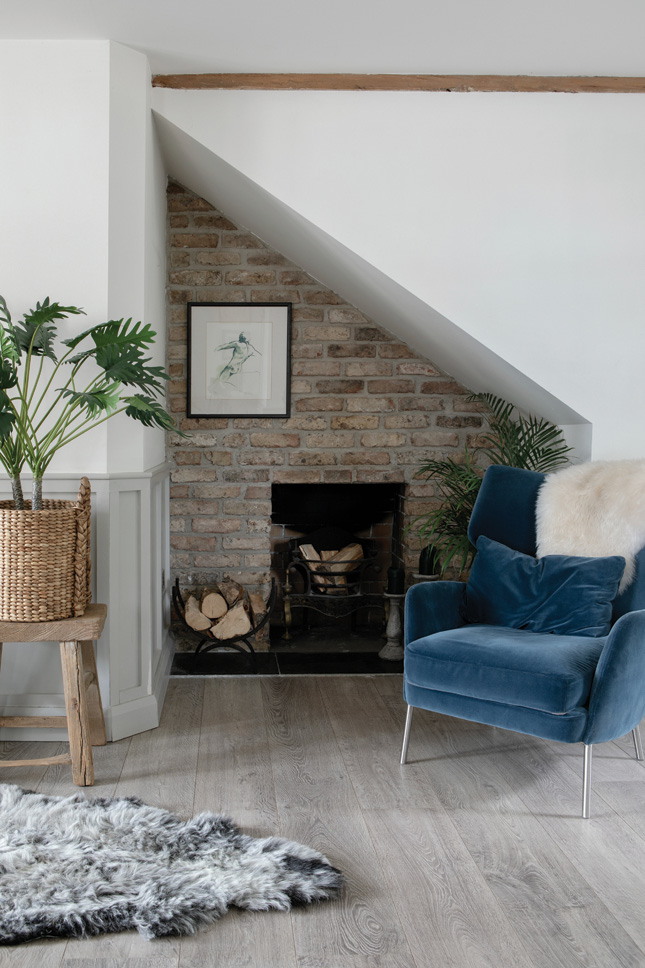 The velvet cobalt blue chair is by Swedish brand, Sits. “Before we moved in Cathal said, ‘I really see myself sitting by the fire reading a book,’ so I got that for his birthday and it brings in a splash of colour.” The drawing is an antique find and the hint of green brings in another tone. The sheepskin rug is from Neptune; similar can be found at Michael Murphy. 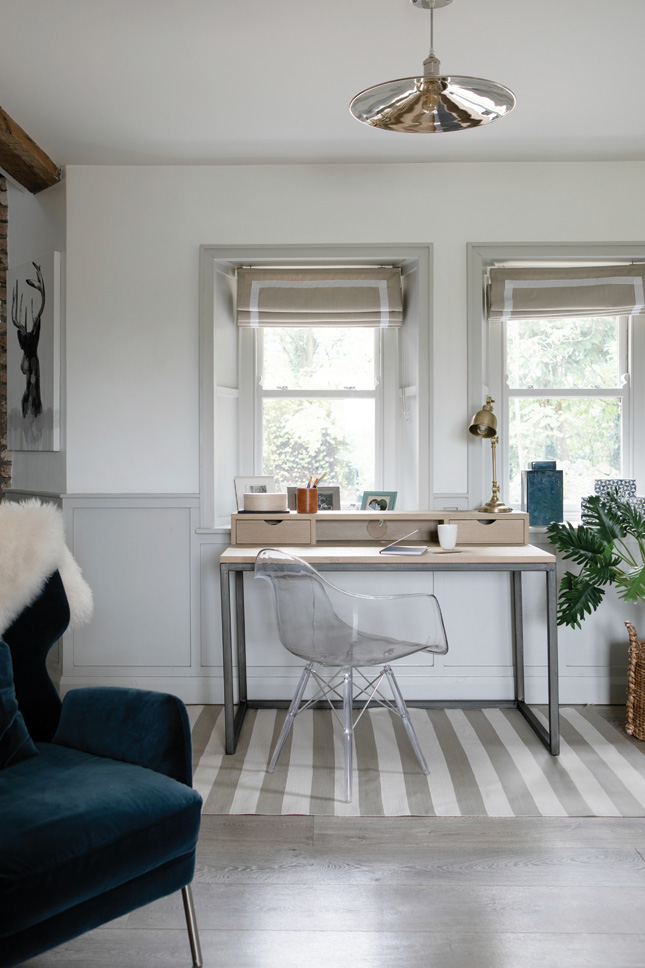 She isn’t afraid of bolder tones, and black is a signature shade running throughout the scheme. A fan of the industrial aesthetic, Geri adores black metal, and uses it to contrast with her home’s litany of natural materials. Accent shades of indigo blue and aqua green offer lightness and appear across artwork, accessories and furniture.

An auction and antiques store junkie, Geri has a strong sense of what she likes. “My father deals in antiques, I’ve grown up around them. I tour the auctions all the time and if I’m travelling, I’ll keep my eye out.” Antlers, Japanese objets, charcoal drawings and sculptures are some of the pieces she favours. 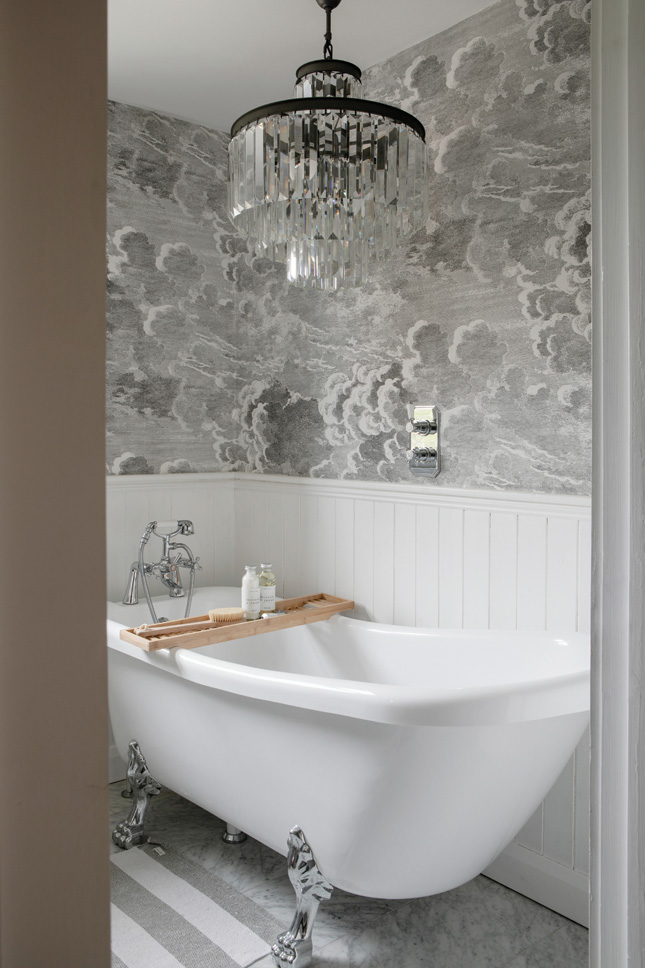 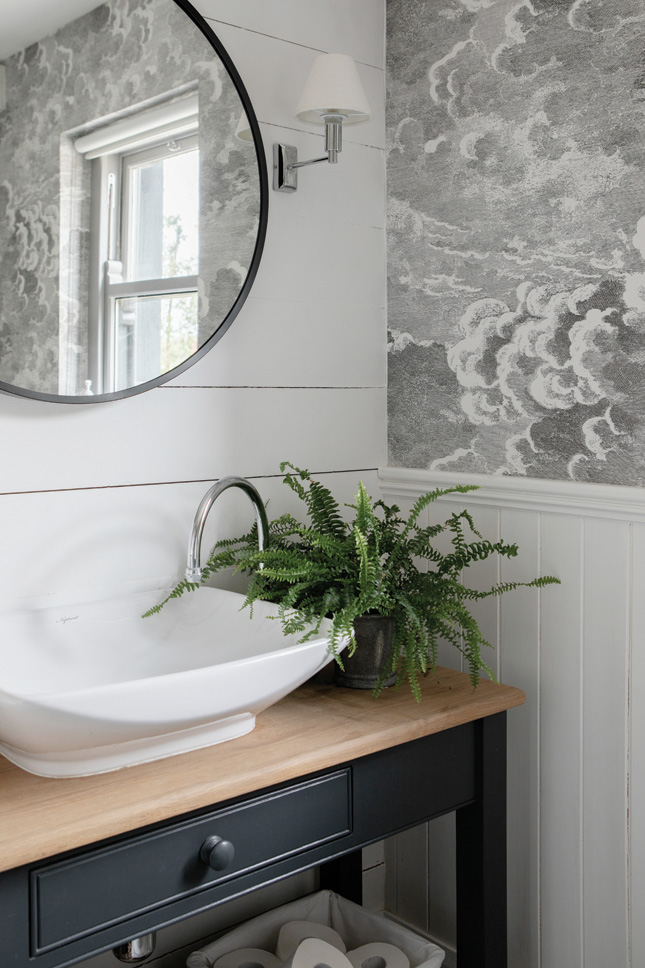 Geri opted for the simple spare lines of the Neptune sink and washstand. “I didn’t have a lot of space and didn’t need loads of storage.” The Miller range at Barretts of Maynooth has a similar design style. The mirror is from Browsers. 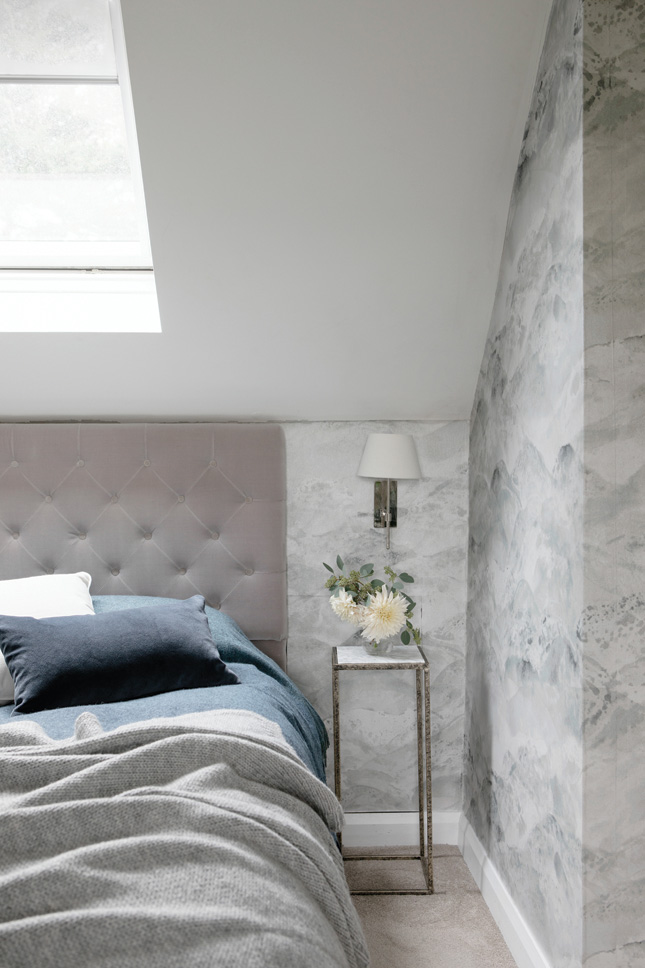 The side table has a Carrara marble top and is from Browsers and the ermine grey velvet headboard is from Neptune. Look for similar style headboards in Harvey Norman. The Zoffany wallpaper is an abstract Japanese mural of mountains that has touches of Geri’s favourite inky blue. “It’s very calming – in colour psychology those colours are good for restful spaces.” The bedding pulls in the darker tones in the wallpaper and is from Neptune. 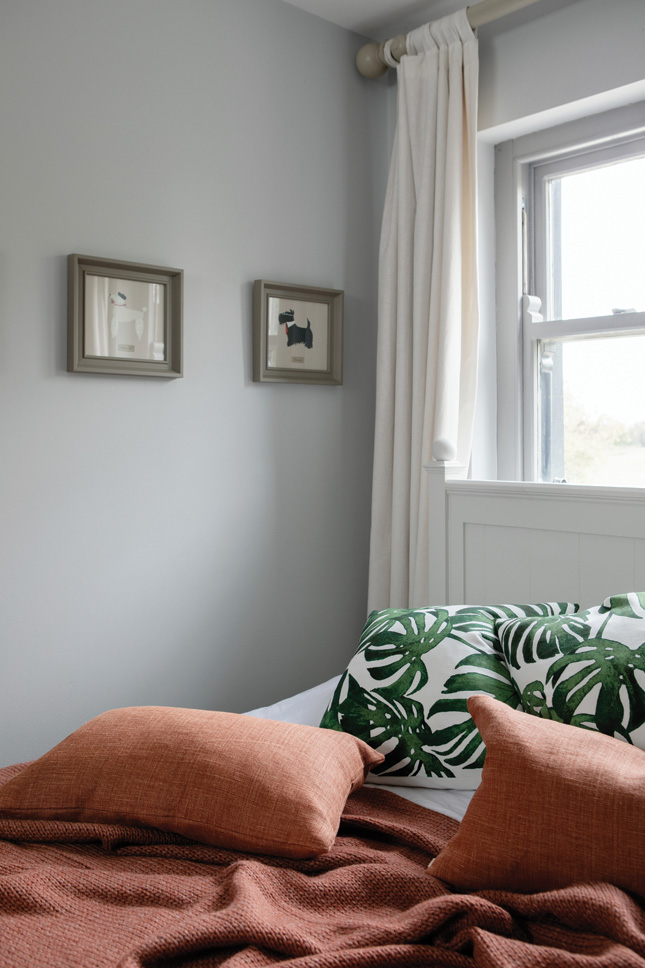 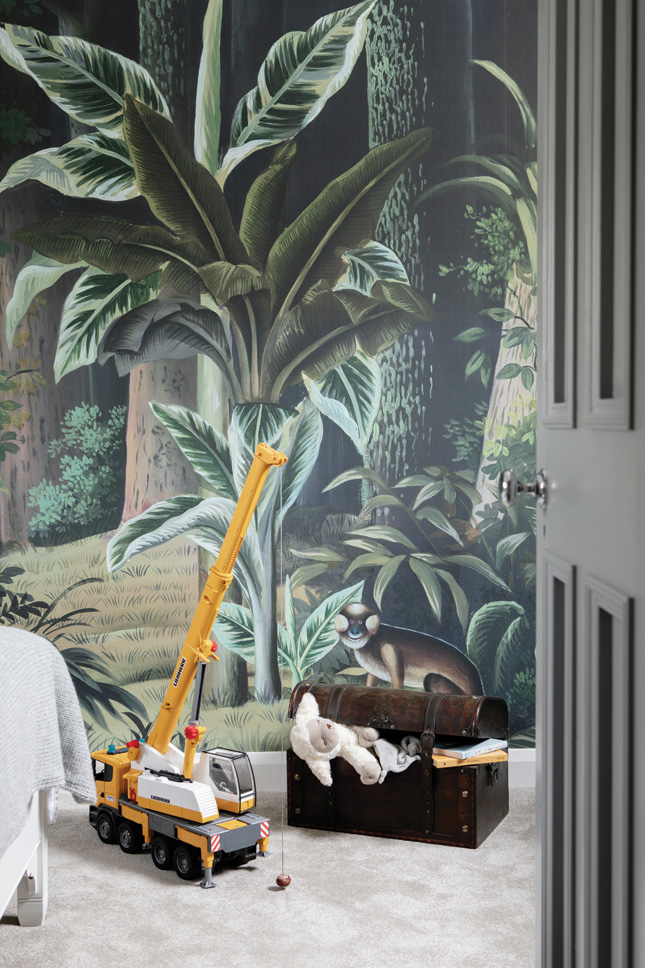 Finlay’s room is a botanical oasis: “I asked him what he wanted for his birthday and he said a forest in his room!” The wealth of greens in the Ananbo mural wallpaper are warmed by the rust and terracotta bedding from Neptune. Look to Zara Home for accessories and bedding in this on-trend shade. 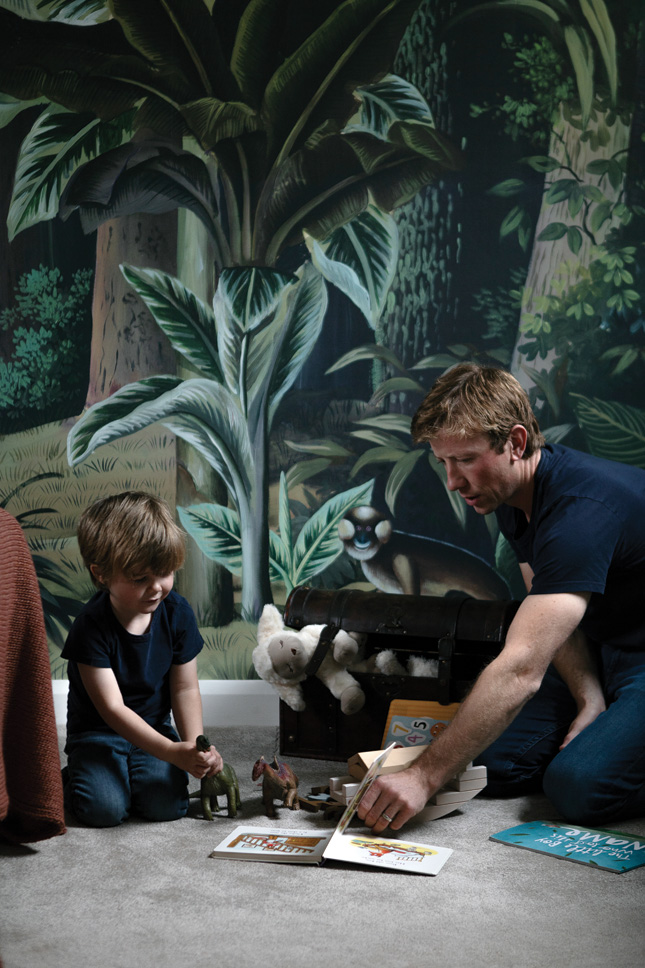 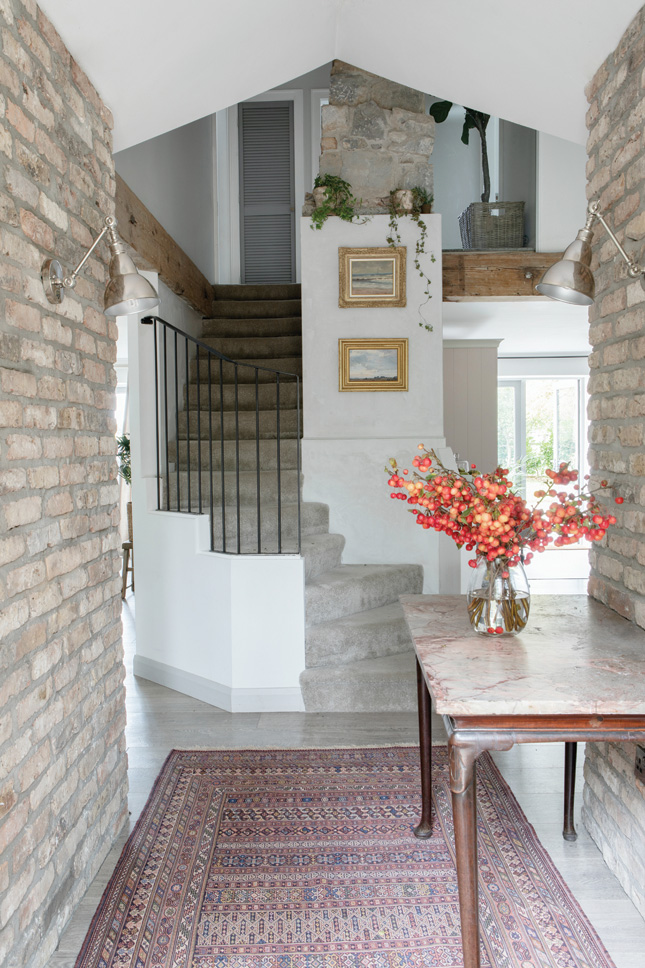 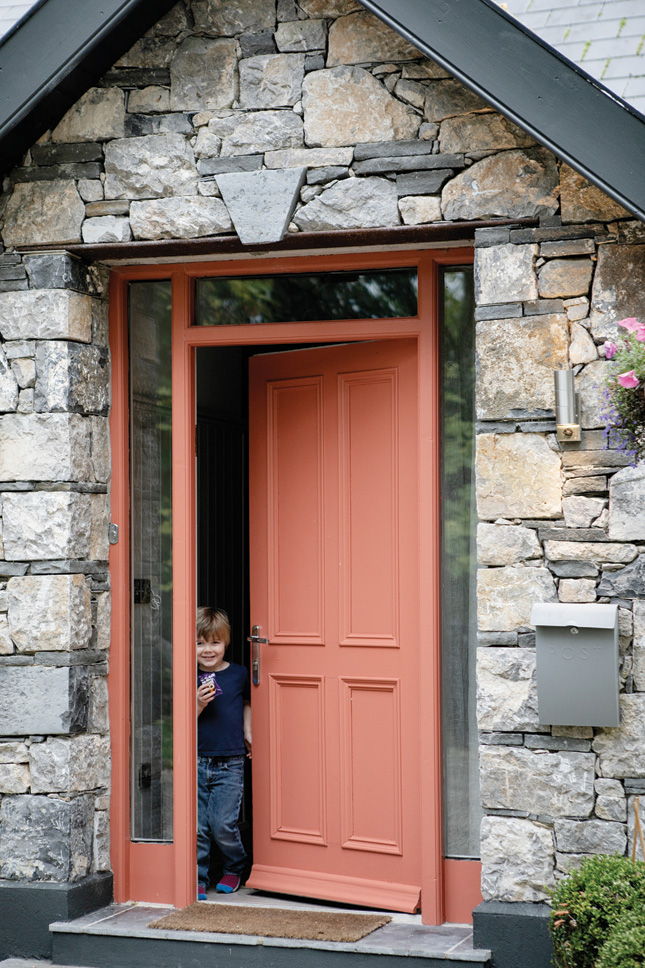 “They have a story, they give soul to a place and I love mixing them in with newer things.” High on her hit list to go is The Store Yard on Portlaoise, Kilkenny Architectural salvage, Wilsons Yard and Adams Auctioneers. As for newer pieces, she doesn’t have to look too far. As well as helming her design business, she is the CEO of Browsers Interiors in Limerick. As well as brands such as Zoffany, Little Greene and Dekton at her fingertips, the store also has a sizeable Neptune showroom: “I love their furniture, it’s traditionally crafted, solid and the design is timeless.”

You might also like: Caroline's self build home in Tipperary is a considered mix of old and new